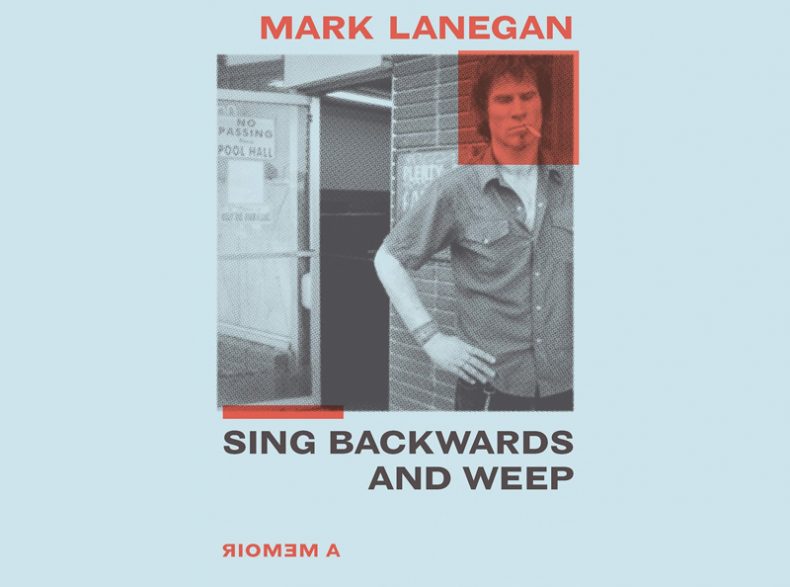 Perhaps best known as the singer of the Screaming Trees, a band that would greatly influence the pending grunge explosion of the ‘90s, Mark Lanegan has released his gripping memoir, Sing Backwards And Weep. His latest book pairs with his recently released album, Straight Songs Of Sorrow, and tells a harrowing, drug-addled tale which follows Lanegan through the ‘80s and ‘90s in the Screaming Trees and a pair of solo projects. Refusing to pull any punches, Lanegan has delivered a rock memoir that easily stands with some of the best there is.

From the very beginning, as Lanegan paints a bleak picture of his home town of Ellensburg, WA and his adolescent misadventures of a budding alcoholic and drug addict, you will struggle to put this book down. Sparing no details nor making any attempt to sugarcoat his story in any regard, Lanegan’s recollections are as vivid as his wit is dry and biting. Within the very first chapter, you’ll be drawn in by the dirt, but you’ll stay hooked on every word out of Lanegan’s sheer honesty and the occasional laugh from his bitter and conversational, almost rant-like writing style. Sing Backwards And Weep proves to be incredibly refreshing in this sense; even as the Screaming Trees are touring across America and Europe, Lanegan does not write himself to be the hero of his own story.

Among the stellar memoir, Lanegan predominantly explores the seemingly neverending quest to get high, including both the lengths he’s gone to and the consequences that followed. His book also interestingly includes his time recording and touring with the Screaming Trees. Without hiding his distaste for his former bandmates, these chapters are quite enjoyable, especially when they include Alice In Chains and when Josh Homme joins the fold much later on. The growing friendships between Lanegan and Layne Staley and Kurt Cobain are also among tragic highlights within the book as one truly feels a deep sense of loss and pure admiration that still haunts Lanegan at the time of writing.

Sing Backwards And Weep comes to a climax with a look into Lanegan’s darkest period shortly before getting clean. These final chapters will pull you in, deeper than before, as you follow Lanegan through a relentless European winter tour where he remains constantly in the corsairs of a debilitating withdrawal process and, upon returning to Seattle, manages to avoid being thrown in prison and being murdered by other local drug dealers he’s chosen to rip off.  If you’re only starting the book now, Lanegan only continues his downward spiral throughout the course of this book. At his absolute lowest, he goes to rehab.

My only wish is that Sing Backwards And Weep included just a few chapters more where Lanegan explores his new friendship with Duff McKagan, his time spent with Queens Of The Stone Age, and his other numerous solo projects and collaborations of the last two decades,  rather than just summarizing all of this up in the last few pages. Aside from not being able to put this book down, I also did not want it to end.

It’s a book that you didn’t know you would want, but Sing Backwards And Weep is an absolute must-read, and judging by its status as an international bestseller, it is one that fans of Lanegan, Screaming Trees, grunge, and rock as a whole need. This is a story of decline and eventual personal redemption through tenacity and a struggle to survive. Living to tell the tale, Lanegan emerges with a book of depravity, regret, and deep reflection. Without a doubt, Lanegan’s Sing Backwards And Weep is a book that will be spoken of in the same sense of regard, acclaim, and respect as the likes of Keith Richards, Anthony Kiedis, Flea, Slash, and Bob Dylan. Between his unique tone and the very nature of his story, Lanegan has ultimately told a story that runs parallel to the traditional rock star memoir and greatly exceeds all expectations.

Best known as the singer of the Screaming Trees, Mark Lanegan is an accomplished artist and has released 12 studio albums and has collaborated with countless artists, most notably including Mad Season and Queens Of The Stone Age.

Purchase Sing Backwards And Weep Via Hachette Books HERE Or Via

A passion for music has always been a part of Gerrod’s life. As a young boy, he was raised on a steady diet of the music from The Chili Peppers, Aerosmith, The Stones, Prince, and others from his mum. Raised in the GTA, Gerrod continued to foster his love for music by attending a wide range of concerts and learning the drums. His unapologetic passion for music has no bounds and has spread to a wide variety of styles, whether it be the 90’s rock that sound tracked his teenage years, the jazz he studied in university, or his newfound love for hip-hop. He recently received his bachelors in music and education from York University and is passionate about writing and reviewing good (and less than good) music. Gerrod is also the drummer and songwriter for a Toronto based rock & roll band, One In The Chamber.
RELATED ARTICLES
booksheavenly recordingsmark lanegan