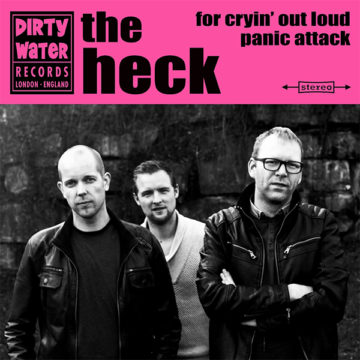 The Heck
“For Cryin’ Out Loud”/”Panic Attack”
Dirty Water Records

Hailing from Drenthe in the Netherlands, comes the latest vintage rock outfit from the Dirty Water Records roster, The Heck. Led by Henri Keefman (De Keefmen, The Miracle Men, The Sensational Second Cousins), the band are directly influenced by ‘60s proto-punk acts such as  The Real Kids, The Remains, The Seeds, and The Pagans, among others, while delivering a retro punk sound that is true to form. The Heck have released their second two song 7” single, For Cryin’ Out Loud following their 2017 debut, Waiting In Line.

“For Cryin’ Out Loud” kicks off the pair of tracks with an immediate and thumping rocker, driven by pounding drums, crunching guitars – reminiscent of The Rolling Stones’ “Get Off Of My Cloud” – with Keefman’s rough and raspy vocals taking the centre. While the song appears simple, the band’s use of backing vocals during the chorus adds a lush and vibrant layer to the song’s punk sensibilities.

Side B follows with “Panic Attack”, a track that feels less like a ‘60s inspired proto-punk jam but rather would fit in with the outrageous punk scene of Los Angeles in the 1970s. The instrumental number runs for just under a minute and a half but it is a scorcher. Unfortunately, its length leaves much to be desired – “Panic Attack” has the potential to truly soar with a dangerously reckless attitude, but instead, feels cut short before the band truly had a chance to develop it.

All in all, The Heck are a fun band who should sit down and, at the very least, write and record an EP’s worth of music – perhaps even a full album. While Cryin’ Out Loud certainly has its moments – mainly the band’s use of classic styles in their songwriting and the reckless abandon for punk rock – the double single format simply does not seem to do the band justice. There just isn’t enough content for this band to make the type of splash that they should be making. That being said, for any fan of what I am starting to refer to as the Dirty Water style, The Heck’s sophomore single is definitely worth checking out.