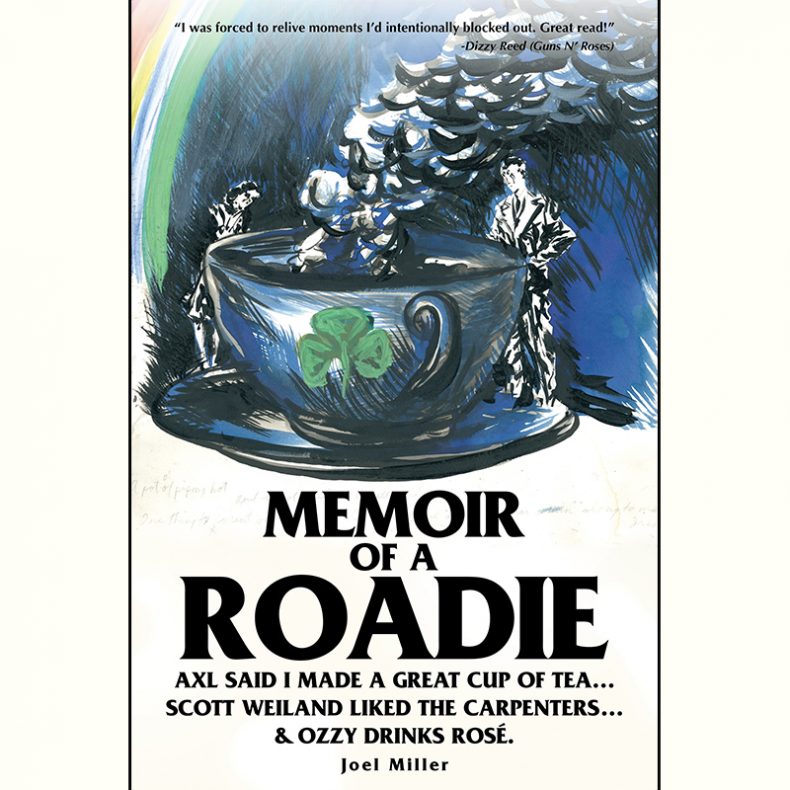 JOEL MILLER – MEMOIR OF A ROADIE: AXL SAID I MADE A GREAT CUP OF TEA… SCOTT WEILAND LIKED THE CARPENTERS… & OZZY DRINKS ROSÉ.

Joel Miller takes us behind the scenes and offers generous glimpses into his experience as roadie for Stone Temple Pilots, Poison, Guns N’ Roses, The Cranberries, and more. One would have guessed the timeline would have been around 10 years, instead it came to a halt after only a few of years into the 2000s. Some of the characters within the book just might be happy he waited two decades for this.

This is a story about a young man about to make a new start in the new millennium. He worked movie sets and found himself doing food runs to Taco Bell for Keanu Reeves. The opportunities were becoming less glamorous, yet he had to look no further than his father’s garage. There was some showbiz industry clientele, including Jay Leno, but it was veteran roadie and lighting designer, “Nigel”, that took Miller under his belt. When not on the road with Stone Temple Pilots, Nigel can be found driving his Jaguar into Miller’s father’s garage for a tune up.

Miller takes the reader on the road as a crew member, but what is more important here is his place as the fly on the wall, the sponge absorbing as much info as possible. He is a fan of many of the bands he works with. He was employed by Stone Temple Pilots, and was once allowed only temporary backstage access to Rage Against The Machine headlining set because he was on a mission to locate a missing road case, while acquiring mental notes and brief backstage poetic glimpses of Zack de la Rocha’s profile of dreads and spit, screaming the opening line to the song “Bulls On Parade”. The missing road case was found.

He puts us in his dirty shoes and occasionally gives a history lesson of the venues he passes through. It was more interesting to hear about working with Ozzy Osbourne and how the stage had to be taped in neon, indicating a space where Ozzy is safe to walk back and forth in a square. His manager/wife Sharon Osbourne heard that Fred Durst of Limp Bizkit was going to be late for their set during the Dysfunctional Family Picnic, which Ozzy was headlining that year. She did not want the schedule pushed back, so a call was put out to the crew to have the on-stage power turned off just as Limp Bizkit was set to play one more song as an encore.

So there are plenty of egos and tiptoeing on eggshells to abide to, just as The Dude abides in The Big Lebowski. In fact a younger 1998 Jeff Bridges might be the perfect actor to play out Joel Miller’s manifesto on the big screen. I am deliberately going into references here, as throughout the book, Miller frequently uses them, as in during the italicized ‘Roadie Ramble Moment’ section inserted between some chapters, explaining such mysteries as where the idiom ‘Bob’s your uncle’ came from.

Down time on the road is the right time for Miller to put pen to paper, finding him composing the lyrics to Darius Rucker’s “God’s Reasons”, which Miller wrote for Rucker. Meanwhile back at the day job, there is a rig of lights called the focus that is set high above the audience and into the skies of these arenas and venues. Miller is equipped to navigate all of this, and to troubleshoot with his mechanical and engineering smarts. When in charge, he runs a tight ship but let us shift gears here as I take you down to the “Paradise City” where what happens in Vegas stays in Miller’s book.

Guns N’ Roses once had a handmade sign created for the 1991 “Don’t Cry” video that read “Where’s Izzy”. The first thing to ask of the 2000 version of Guns N’ Roses is “Where’s Slash?” or “Who’s Buckethead?”  Axl Rose is the only original member here, and is attempting to revamp an all-new Guns N’ Roses lineup that was set to perform on New Year’s Eve 2001 in Vegas, for the first time since 1993. The new band members had signed confidentiality agreements preventing them from talking about any goings-on within the Guns N’ Roses orbit. Fortunately, this did not apply to the fly on the wall named Joel Miller. Axl always tried hard to control the narrative, so it becomes extra special when ‘Memoir for a Roadie’ opens a Pandora’s box with snapshot scenarios from that GNR era. The next show would be two weeks later at the Rock in Rio Festival for 250,000 Brazilians. Quite a contrast from the 1,800 in attendance at the House Of Blues in Vegas, but there was always an abundance of moving parts and egos to deal with at both shows.

I actually thought the book was going to have an ending where we see Miller entering rehab but that would be too typical of the classic rock ‘n’ roll tragedy ending. Instead, he closes things up whole-heartedly speaking of his father’s battle with cancer, and how he passed away with Miller far away on the road, hearing the horrific details from his mother over the phone. He also played babysitter to Scott Weiland, spotting him casting a toy fishing rod into a small creek that happened to be in close proximity to that evening’s venue. Weiland then asks “Have you ever been fishing, Joel?” A suggestion is made to try this another day with real fishing rods as he escorts Weiland safely back to the venue backstage headquarters.

The passion for his work is evident, whether Miller is minding the late Scott Weiland or preparing a great tea for Axl Rose. Only a couple years into the new millennium and this party was over. Miller does a good job of connecting the dots of links that were missing for a long time. We all know the rest of the story.

Purchase Memoir Of A Roadie Via