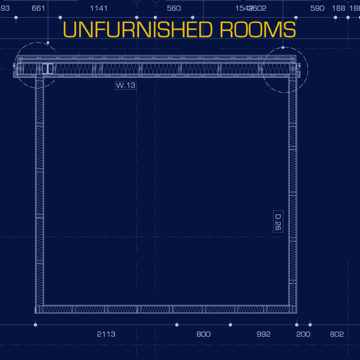 Blancmange is Neil Arthur, or Neil Arthur is Blancmange. Since Stephen Luscombe left the band (the other original member) due to health reasons, Arthur has carried the torch and continued on under the Blancmange name. Unfurnished Rooms is Blancmange’s ninth studio album and the fifth album without Luscombe. Arthur has been amazingly prolific of late and in fact this is his second album this year, as he is one half of Fader who released their debut album, First Light, in June of this year.

Quite frankly, Arthur has outdone himself with Unfurnished Rooms. It is is one of the best Blancmange albums ever. This is no easy task, or a statement made lightly, as Blancmange have released eight brilliant albums. But on this one, Arthur is not holding back and he has produced an album full of memorable songs (and characters) that stay in your head, burrow and keep drawing you back.

Arthur has always been a brilliant lyricist, but, again, on Unfurnished Rooms he does what he does well, but even better than before. Listen to “What’s The Time”, “Just some things to pass the time as everything else is moving on.” And then, a list of questions, some trivial but all meaningful, beginning and ending with “What’s the best dog you ever had?”. This is all set to a steady beat and some tight playing from the band.

Musically and lyrically there is more than a little melancholy on this album. Although Arthur does not discuss the health of his old Blancmange partner, Luscombe, there are certainly nods toward him throughout, but especially on the song “Old Friends”.Arthur is able to express himself both with his words and his music. And a song like “Old Friends” is beautiful in its’ quiet melody. Arthur knows when to use volume and when to play it quiet. The power in the low volume speaks more than words.

Arthur has always surrounded himself with brilliant musicians, Even with Luscombe, Blancmange were never shy in asking guest musicians to assist. For Unfurnished Rooms, Arthur is joined by co-Fader member, Benge (who also works with John Foxx) to assist and co-produce. Even more intriguing is guest John Grant who plays piano and provides backing vocals on the song “Don’t Get Me Wrong”. It is a beautiful and moving song.

Arthur has been busy this year, tours of Europe and The U.K., the Fader, this album and the boxset, The Blanc Tapes, comprising not only the first three studio albums but also a ton of extras. But this work has not impaired him, if anything it has motivated him to produce some incredible music this year. This is an artist who has something to say and has found the best way to express himself. Unfurnished Rooms (excellent title and great sleeve) is a brilliant album that will age well and will be with us a long long time.

Born and raised in Whitby, Aaron discovered music through his love of The Beatles. This led to a career in radio, writing for various publications, and ultimately a radio show about The Beatles (Beatles Universe), which ran for over four years. When not immersed in music, Aaron enjoys spending time with the loves of his life -- his wife Andrea, and daughters Emily and Linda (all of whom have an intense love of music too).
RELATED ARTICLES
album reviewsanna dineblanc check records
8.0