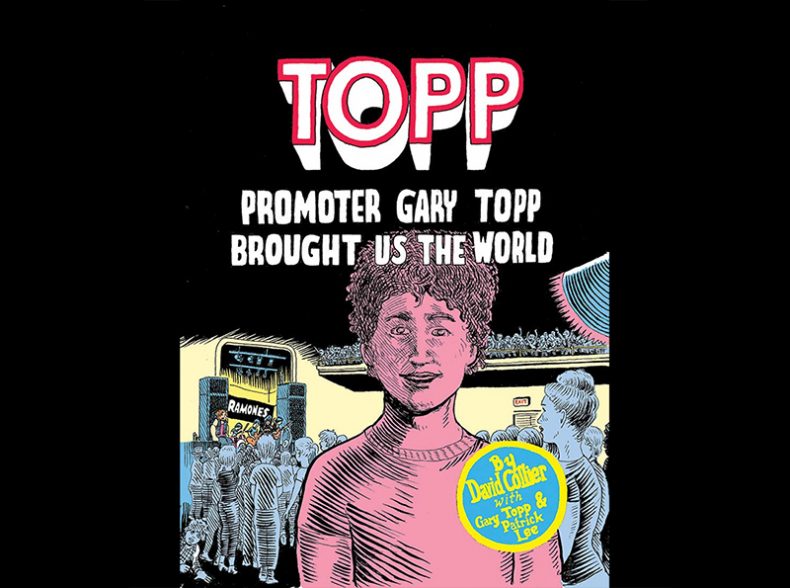 Topp (Promoter Gary Topp Brought Us The World) by David Collier with Gary Topp, is the graphic novel biography of Gary Topp, one of Toronto’s premier early rock promoters and tastemakers, who in the 70’s, with his partner, Gary Cormier, introduced Toronto audiences to bands like The Police and The Ramones (before either band was famous). Topp was also the driving force behind the “Original 99 Cent Roxy”, that showed art films directed toward the younger generation, including films like “The Rocky Horror Picture Show” and Led Zeppelin’s “The Song Remains The Same”.

Working as Promotion Manager at PolyGram Records in Toronto during that time, I had a ringside seat to the ongoing mad scene at The Edge, the downtown club the Gary’s booked bands into for a time, including new labels like IRS and Virgin, who had recorded new wave acts like The Police and Fingerprintz from England, and a band I eventually ended up managing, Toronto’s own new wave act, Martha And The Muffins, before they had had a worldwide hit on Virgin/Dindisc Records, titled “Echo Beach.”

Reminiscent of the R.Crumb “Head Comix” books of the 60’s, Collier’s artwork is sublime, and Topp’s story well worth telling, with a cast of real life intriguing characters, that drop in and out of Gary’s life story, leaving their mark, or sometimes perhaps not.

Purchase Topp: Promoter Gary Topp Brought Us The World Via