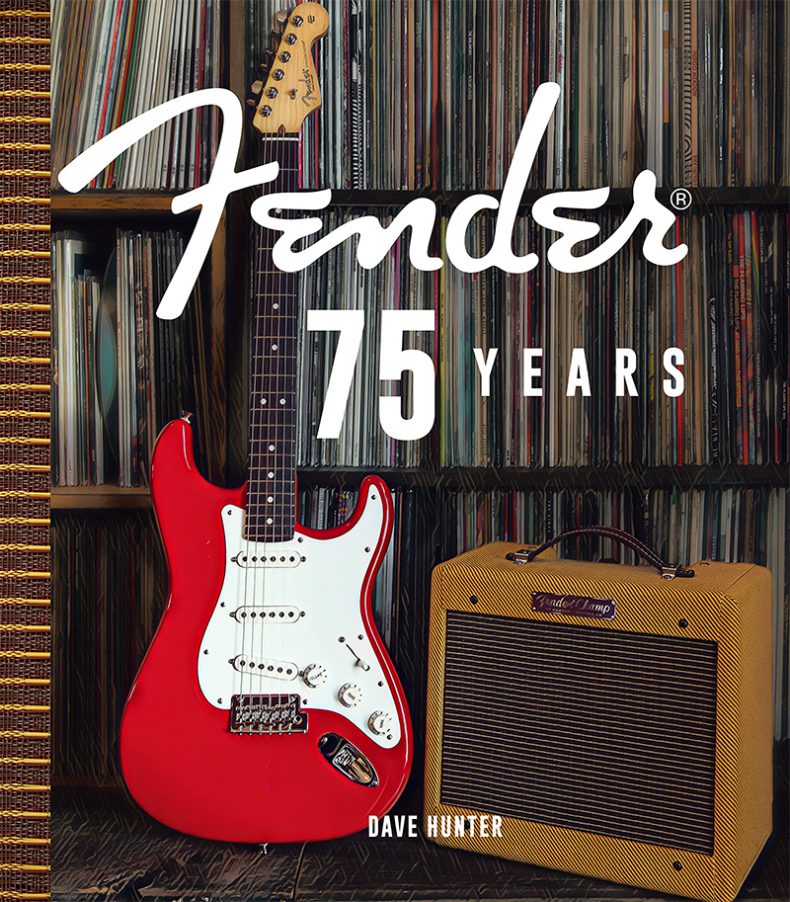 Over the course of nearly a century, Fender has become one of the most recognisable brands of guitar, largely thanks to their classic and consistent shapes and, more importantly, the unique Fender sound. It is for this reason that author Dave Hunter, of magazines Guitar Player and Vintage Guitars, has chosen to spotlight the American guitar company in Fender: 75 Years, a concise yet thorough and visually stunning celebration of Fender.

First and foremost, Fender: 75 Years is a love letter to a set of guitars and amps that have become as iconic as some of the legends to be associated with them – including the likes of Keith Richards, Jimi Hendrix, Kurt Cobain, Tom Morello, and countless others. Hunter traces the roots of the company back to Leo Fender’s earliest engineering and uses primary sources, such as quotes from various interviews – many of which conducted by himself over the years – original blueprints, and patents. It is through his efficient use of sources that Hunter can tell the story of Fender without going into excruciating details while still giving their story a sense of depth and importance. While he may skirt around and minimize some of the lows, Hunter manages to walk his readers through 75 years of history and innovations.

Hunter’s narrative is further aided by his extensive and effective use of visuals. At its core, Fender: 75 Years is a coffee table book designed for anyone to flip through and enjoy visually. Through the photos of different artists using Fender products, to promo shots of their gear, alongside blueprints and hand sketches, Fender: 75 Years is a true visual experience. The use of original advertisements throughout the decades in particular is a unique highlight, next to the beautiful array of vintage, custom, and modern guitars. Paired with Hunter’s words, Fender: 75 Years makes for a very exciting read.

With an external slip modeled after Fender’s signature tweed finish, the cover along would make Fender: 75 Years a winner. While we don’t judge books by their cover, thankfully for Hunter, his deep dive into one of America’s greatest guitar companies is a fantastic read for guitarists of all likes from beginners to collectors. For the cover and rich use of photographs and illustrations within alone, Fender: 75 is a great book to leave out on the coffee table for curious minds to casually flip through. Beyond this, however, it is a fun and engaging book that follows Fender from the ground up to today.

Dave Hunter is an author, musician, and journalist. He is the author of several popular books about guitars, amps, and effects, including Voyageur Press’ Star Guitars, The Fender Stratocaster, The Gibson Les Paul, and 365 Guitars, Amps, & Effects You Must Play. A regular contributor to Guitar Player and Vintage Guitar magazines, he resides in Portsmouth, New Hampshire.

A passion for music has always been a part of Gerrod’s life. As a young boy, he was raised on a steady diet of the music from The Chili Peppers, Aerosmith, The Stones, Prince, and others from his mum. Raised in the GTA, Gerrod continued to foster his love for music by attending a wide range of concerts and learning the drums. His unapologetic passion for music has no bounds and has spread to a wide variety of styles, whether it be the 90’s rock that sound tracked his teenage years, the jazz he studied in university, or his newfound love for hip-hop. He recently received his bachelors in music and education from York University and is passionate about writing and reviewing good (and less than good) music. Gerrod is also the drummer and songwriter for a Toronto based rock & roll band, One In The Chamber.
RELATED ARTICLES
books