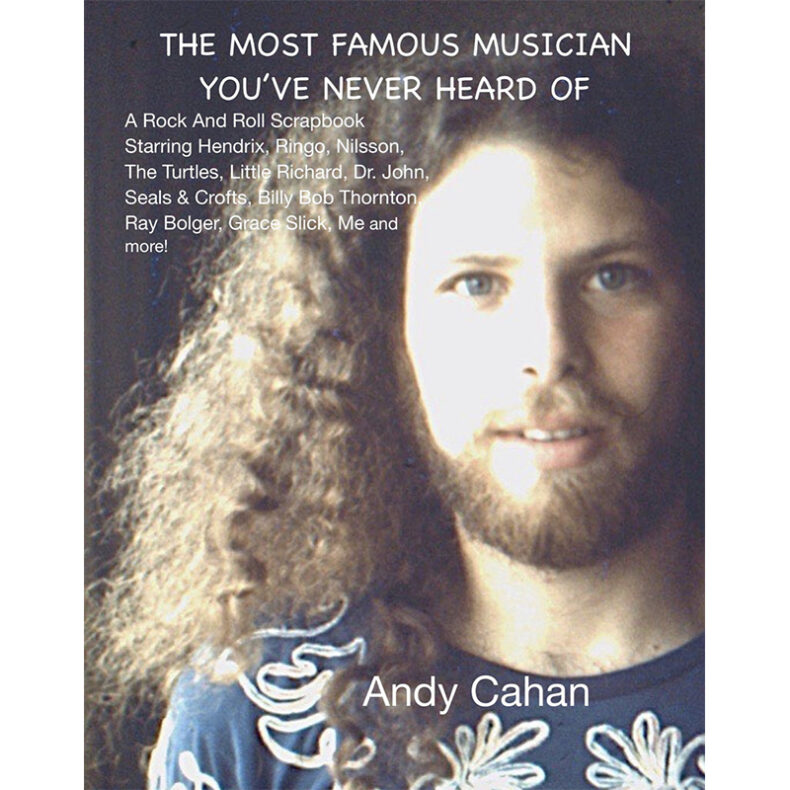 ANDY CAHAN – THE MOST FAMOUS MUSICIAN YOU’VE NEVER HEARD OF

Andy Cahan may not be an instantly recognizable name, but the bands and artists with whom he worked are very well known. He is known for his keyboard playing and has been part of many classic albums and projects. He has worked with Seals and Crofts, Flo and Eddie, The Turtles, Geronimo Black (Jimmy Carl Black from The Mothers Of Invention), Dr. John, Chuck Berry, Harry Nilsson, Ringo Starr and even Strawberry Shortcake. He is more than a session player, in that in many cases he has been an active member in the bands noted above. In 2020, he decided to write his story. The book was born and the subtitle says it all A Rock And Roll Scrapbook Starring Hendrix, Ringo, Nilsson, The Turtles, Little Richard, Dr. John, Seals & Crofts, Billy Bob Thornton, Ray Bolger, Grace Slick, Me, and more!

As it is a scrapbook, it is illustrated with a number of very interesting and never before photographs of the artist with whom he worked. Plus there are a number of stories about his work and experience. Cahan is a born storyteller. He seems to enjoy telling each story, for example talking about being the music director for Dick Clark’s American Bandstand 20th Anniversary Special. He works with a number of different artists for the special and it is an interesting time in music and his career. The photos of Little Richard are outstanding. But I am not spoiling any stories here. He develops friendships, especially with Geronimo Black and Flo and Eddie. Some of the stories are very funny, especially the performing of the national anthem at a Rams game. Also, his stories about his time with Harry Nilsson are full of fun and great adventures.

Although there are a lot of stories, he does not go into them very deep. That would be the only complaint about the book. He has worked with so many influential and fascinating artists that he often lets photographs speak instead of text. More in-depth information would have been welcomed. This includes his love of horror films. He has a nice, conversational manner of writing and he does sell himself short with the lack of text. Having said that, what he does write is enjoyable and very fun.

Also, the foreword is written by Maxwell Gail Jr. of Barney Miller fame. It is such a joy to see him write the foreword and completely unexpected. But overall this is a fun read, full of nostalgia from the 1950s right up to the 2000s. It is a book that fans of classic rock will enjoy. It is a chance to read about behind the scenes and learn about the history of rock, pop, and music in general. It is a positive read and Cahan is a fan of the artists as well as a friend. Great book!

Purchase The Most Famous Musician You’ve Never Heard Of Via

Born and raised in Whitby, Aaron discovered music through his love of The Beatles. This led to a career in radio, writing for various publications, and ultimately a radio show about The Beatles (Beatles Universe), which ran for over four years. When not immersed in music, Aaron enjoys spending time with the loves of his life -- his wife Andrea, and daughters Emily and Linda (all of whom have an intense love of music too).
RELATED ARTICLES
booksthe monkees