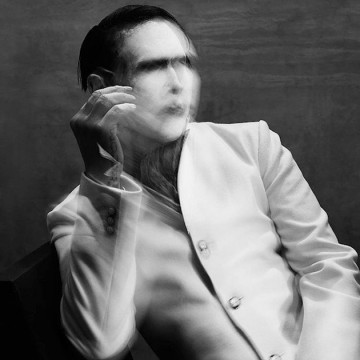 The king of industrial doom rock is back in top form for 2015 promoting another set of sick, disturbing, and irresistible tracks on his new album The Pale Emperor. Marilyn Manson just unleashed his 13th studio album and has carefully managed NOT to sound dated or out of favour. This album is better than ever and will immediately grab your attention.

Standout tracks include opening track “Killing Strangers,” which has intriguing and sinister lyrics of death, love and destruction. The crushing drums, bass, and guitars pound heavily with slow and sludgy rhythms polished by Manson’s demonic vocal track. The second track, “Deep Six,” is a tune reminiscent of Manson’s biggest career hit, “The Beautiful People.” Its monstrous pre-chorus hits you within the first thirty seconds, making it one of the best tracks of the lot, hands down. The song quickly reels the listener tightly into the album’s devilish allure with no chance of escape. Another track that really blows up in your face is “The Mephistopheles of Los Angeles.” This track is a reflection of Marilyn’s real-life persona and his similarities to the folklore legend and how he collects dammed souls as his appointment to Satan. This is a brilliant song with a delicious chorus that will stick in your mind like a curse.

It seems as though Manson has not come down from his peak, instead he’s still releasing extremely strong and potent records in the way he only knows how: dark, disturbing, and deadly, regardless of the current trends. For fans of Marilyn Manson and industrial metal this album is a MUST.

Andre has been writing for The Spill Magazine for over 12 years, dating back to the print days. His passion for music goes far beyond writing reviews for new music and live concerts, he is also an active musician and producer on the Canadian music scene. Having toured North America and Europe with various acts, he is no stranger to dedication and work ethic new bands must endure to make the grade in today's market; Andre always delivers perspective writing that is authentic and to the point. Mr. Skinner typically covers indie rock, grass roots, electronica and is our resident hard rock and heavy metal specialist. He is extremely selective on what bands he covers for articles and you can rest assured they are ALWAYS band to watch with something left of centre to offer.
RELATED ARTICLES
album reviewsmarilyn manson
8.0