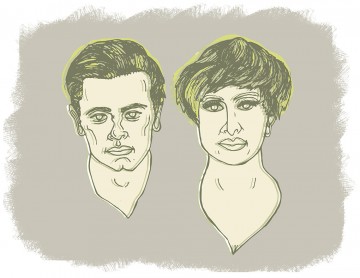 After getting back from a European tour with his band, Peter Dreimanis met Leah Fay at a bar in Toronto, after which they decided to form July Talk, along with Ian Docherty, Josh Warburton and Danny Miles. July Talk’s style of music is a mix of alternative and indie rock.

In 2013, after releasing their debut album, they toured alongside Billy Talent, Matt Mays, Arkells, Sam Roberts, The Besnard Lakes, Weezer, Matthew Good Band, and Tegan and Sara. In the summer of 2013, they began working on a studio album. In 2014 July Talk was nominated for Breakthrough Group of the Year at the 2014 Juno Awards in Canada. During the live broadcast they presented the award for Group of the Year to Canadian Artists Tegan and Sara, alongside Canadian Rap Artist Shad. In Summer 2014 they played at multiple festivals including the Lachie Music and Arts Festival, Toronto Urban Roots Festival, the Festival d’été de Québec, Osheaga, Squamish Valley Music Festival and Rock The Park London. In fall of 2014 they listed tour dates across Canada and the United States in support of The Rural Alberta Advantage, and are currently in the midst of touring North America and Europe.

Daniel is an illustrator/graphic designer based out of Austin Texas. He graduated from Pratt Institute with a Bachelors degree in Illustration and an Associates degree in Graphic Design. Daniel started his career in graphic design in the world of online casinos. Since then he’s worked with various clients from around the United States and Canada including but not limited to NHL, Subway, Paraco Propane, Pitney Bowes, Xerox, Conduent, Nestle Waters, The Spill Magazine, Stamford CT’s DSSD, Beechnut Baby Foods, Elizabeth Arden and much more.
RELATED ARTICLES
daniel adamsjuly talkportraits