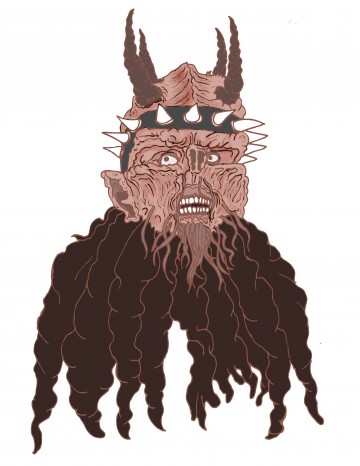 Oderus Urungus was the fictitious stage persona of Canadian-American musician David Murray “Dave” Brockie (August 30, 1963 – March 23, 2014), lead vocalist of the metal band GWAR. The character of Oderus Urungus appeared as an intergalactic humanoid barbarian with devil horns and a meaty-looking face, and carried a long sword named “Unt Lick” and a cuttlefish around his loins.

Brockie portrayed Urungus from the band’s beginning in 1982 until his death on March 23, 2014. On Sunday March 23, 2014, Brockie was found dead in his home. According to police, Brockie was found deceased and sitting upright in a chair. Foul play and suicide have been ruled out as causes of death, but drugs are being considered as the official word awaits from a medical examiner. GWAR’s management confirmed the reports of Brockie’s death on the official GWAR website at 4am on March 24 and news of Brockie’s death spread quickly with many of his fellow musicial peers and bandmates responding through social media. Mike Bishop, former member of GWAR, was one of the first to confirm Brockie’s death.Outside of GWAR, he also performed as a bassist and lead singer of several side projects, including X-Cops and the Dave Brockie Experience. His death left the band without any founding members and the band’s future remains in question.

Daniel is an illustrator/graphic designer based out of Austin Texas. He graduated from Pratt Institute with a Bachelors degree in Illustration and an Associates degree in Graphic Design. Daniel started his career in graphic design in the world of online casinos. Since then he’s worked with various clients from around the United States and Canada including but not limited to NHL, Subway, Paraco Propane, Pitney Bowes, Xerox, Conduent, Nestle Waters, The Spill Magazine, Stamford CT’s DSSD, Beechnut Baby Foods, Elizabeth Arden and much more.
RELATED ARTICLES
daniel adamsgwarportraits