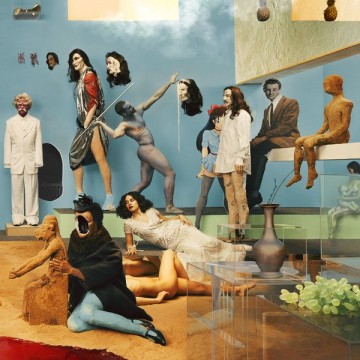 Four records deep, Yeasayer refuse to sound like one band, or even a couple of bands, and they seem pretty dead-set on keeping it that way. Saxophones, drum samples, harpsichords, children’s choirs and theremins are all hastily jammed into Amen & Goodbye like clothes into a suitcase after a domestic dispute.

This album doesn’t always quite make sense, but at least it’s interesting. Some of the tracks are manic-depressive; yanking listeners’ ears from one mood to another, while others are acid-laced expressions of sheer ADHD indulgence, jumping across genres and geographical regions in a cacophonous celebration.

“Silly Me” is benign new wave, “Dead Sea Scrolls” is a tug of war between helium-infused jingles and pitchy electro-pop, and “Divine Simulacrum” is a jittery torch song equal parts Portishead and George Harrison.

These songs demand your attention and energy like a toddler at a theme park. But, hey, you still end up really enjoying some of the rides.

But neither the eccentricity nor the hooks are what make Amen & Goodbye work, it’s the delicate mixture of the two, and when they start to separate, the record suffers. “Child Prodigy” sounds like a band too eager to prove how far off the deep end they can go, where at this point in the record, and in their career, it’s unnecessary. Conversely, album closers “Daughters Of Cain” and “I Am Chemistry” don’t merit anything more than a shrug after the deranged euphoria of “Uma” and the Wilco-esque “Cold Night.”

Co-vocalists and principal songwriters Chris Keating and Anand Wilder are nothing if not ambitious. They write lovely pop hooks, but just to make it a little more interesting, they structure their songs the way David Lynch structures his movies, adding layers and caveats that can be mystifying, but seldom leave you bored.

Marko Woloshyn is a Mississauga-based writer and musician. He owns a limited edition repressing of Mclusky Do Dallas and one time at a concert a drunk woman told him he looked like Keira Knightley.
RELATED ARTICLES
album reviewsamen & goodbyemute records
8.0