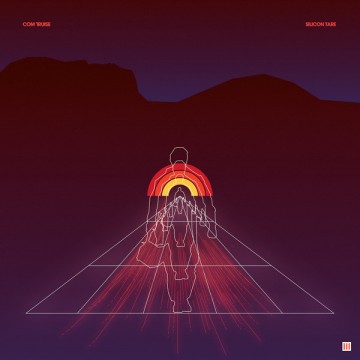 Synthwave started sometime mid-2000s, but didn’t really become a thing until the 2011 film Drive was released. Cliff Martinez’s brilliant score was moody, melodic and very ‘80s. The synth-heavy soundtrack set that film apart and helped make it a cult classic.

The same year Drive was released, the New Jersey-based producer Seth Haley, who performs under the stage name Com Truise, released his first EP with Ghostly International. Since then, he has released nothing but pure gold.

Haley’s latest release, Silicon Tare EP, is the third installment in his space opera which began on his freshman album, Galactic Melt, and was continued on Wave 1 EP. As expected, Silicon Tare follows a similar structure to these previous releases, but it’s clear that his sound has matured. Haley said, “Change is in the air,” when describing the fate of his sci-fi epic and he’s clearly right. Here he has honed his talent for delivering well-crafted songs all the while having an experimental edge.

The listener is lured in slowly with “Sunspot,” a hypnotic jam with a few infectious drum-tracks, echoing Prince’s 1999. “Forgive” sounds like it could have been a theme to an ‘80s cop show while the ambitious title-track channels has he essence of a soundtrack to an old school Nintendo game.

The centrepiece or the album is unquestionably “Diffraction,” which begins with a trippy ‘80s synth riff and a pulsating electronic drum-beat that would rival even Afrika Bambaataa in his prime. It’s the kind of song you need to listen to over and over before you can get it out of your system

Silicon Tare is a near-perfect EP with its blend of funky, upbeat tracks and haunting melodies that are held together by Haley’s quirky ‘80s sound.

As a child growing up in the suburbs, Ryan found music as a way to soothe his boredom. After first hearing AC/DC at the age of 10, he was hooked on music. Tracing its roots to the ‘50s, he became obsessed with Elvis, Buddy Holly and Chuck Berry. Somehow that led to grunge, then psych-rock, then jazz, etc. The list goes on and on and his collection of vinyl records continues to grow.
RELATED ARTICLES
album reviewsghostly international
8.0