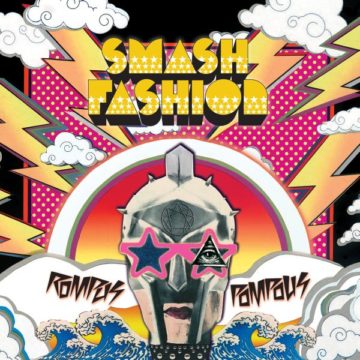 You want some classic ’70s rock/power pop guitar hooks and fresh kicks? Come get some! This aptly titled fourth album from the LA rock ‘n’ roll band SMASH Fashion fills the void of those classic rock bands that have faded away into the mahogany darkness. In an era where you really have to look for current classic rock ‘n’ roll bands on your own, the high energy Rompus Pompous does a good job of appealing to those sensibilities.

Boasting 11 songs at around 48 mins, the foursome open up with the fiery, bold faced “Can’t Take You Anywhere”, that unloads in your face with an electrifying opening guitar, and Deering’s leathery vocals. Moving on to “Soft As A Rock (Helium Head)”, we see another great hook in the chorus and again, some ass kicking mercenary guitar licks. From the slow paced “Tender Was The Hook” to the uptempo “Teenage Demon” (which starts off like “Back in the USSR”??), to the tongue in cheek, double entendre, toe-tapping “Proper Way To Eat A Muffin” (my favourite), the bandmates can really show their versatility. The drumming and crusading bass riffs are bitchin’, while the elegiac guitar twinning bend and sing, old school style. The album ends with the evaporative ballad “Smiles and Daggers”, as epic piano guest star Mike Garson (of David Bowie connections) and timpani slowly pull us in, while Deering code switches into melancholic/introspective vocal mode. This track bookends the album with a “magnum opus” that could be comparable to their own “November Rain”.

If you’re a fan of retro rock ‘n’ roll, this album doesn’t need time to grow on you as you  can just close your eyes and submerge yourself into the past as the slew of tracks ooze ear-napalm. As the guitar shredding goodness drips like molasses on each track, the harmonica parts and the tambourine silhouette more layers to the tracks. After listening to the album a few more times, I personally couldn’t find anything to dislike about this release. I understand what they’re trying to do, and they do the classic rock/glam genre quite well. The great qualities of this album are its different moods and pace as they hit the trifecta of what all rock albums try to achieve; a blistering anthem track, the power ballad, and the stadium staple.

This is another effortless, stellar album put forth by SMASH Fashion, pulling them in the right direction with no risk of instrumental dysfunction. It’s been 12 years since A Gentleman’s Guide to Sophisticated Savagery came out and it doesn’t look like the band’s songwriting is slowing down any time soon. Check off the “awesome” box as SMASH Fashion keeps going in the right direction. We need more bands like these in the mainstream, especially when it’s a rock band where Deering’s calling out all the Nicky Minajes of America to listen more carefully to the fantastic rock music currently within the U.S.

Insert pretentious stuff about me here. I was born at a very young age. I am pretty, funny... without the comma. Easily distracte
RELATED ARTICLES
album reviewalbum reviews
10