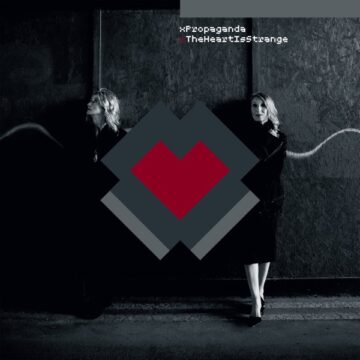 xPropaganda is composed of  Claudia Brücken and Susanne Freytag, who were one half of the brilliant and groundbreaking band Propaganda. In 1985 they joined forces with Ralf Dörper and Michael Mertens and the four created a sound that was experimental yet accessible. The end result was the now classic debut album, A Secret Wish (1985). Fast forward to 2022 and we now have the real follow-up to A Secret Wish. Not only is the album that should have been 37 years ago, it is actually better.

The duo also got together with Steve Lipson, who had co-produced A Secret Wish with Trevor Horn (Horn is credited as advisor). The three have managed that rare skill of tapping into the original sound while at the same time adding a current feel to the music. Brücken and Freytag’s vocals are instantly recognizable as the voice of Propaganda and the new music equals the music of the past.

The beauty of the album is that it does not play out as expected. For example, the album opens with a lengthy song, “The Night” that features a two-mins introduction before those glorious vocals hit your ears. It is a stroke of genius, as the listener is hooked and waiting. The music is dramatic and electronica at its best with some serious horn thrown in for good measure. This song leads into “Chasing Utopia”, again, electronica but very different from the opening track. From there, the journey continues with many highlights, including their wonderful “No Ordinary Girl”, and “Don’t (You Mess With Me)”, which is one powerful song.

The album ends with the ambitious and stunning “Ribbons Of Steel”. This is a sound collage with excellent use of lyrics and tone. It is beautifully arranged, and is the perfect way to end the album, especially given how the album opens. The song is haunting and full of imagery. It is not to be missed. And although it is lengthy(nearly ten minutes) it, again, never gets boring. It is reminiscent of “Mr X” by Ultravox but just a little more personal and desolate. It is a work of art.

The Heart Is Strange combines interesting sounds, transitions between songs and damn catchy music. It is an album that one never tires of, xPropaganda engages the listener and doesn’t let go.

Lipson’s production is flawless, as one would expect and although there are numerous co-writers throughout the album, the album clearly belongs to the trio. They have formed a tight, united and wonderful sound. Fans may want to look for the deluxe CD version, which includes an instrumental version of the album, which works as its own creation. Further, the 5.1 mix available on Blu-ray is quite stunning.

Born and raised in Whitby, Aaron discovered music through his love of The Beatles. This led to a career in radio, writing for various publications, and ultimately a radio show about The Beatles (Beatles Universe), which ran for over four years. When not immersed in music, Aaron enjoys spending time with the loves of his life -- his wife Andrea, and daughters Emily and Linda (all of whom have an intense love of music too).
RELATED ARTICLES
album reviewalbum reviewsdon't (you mess with me)
9.0