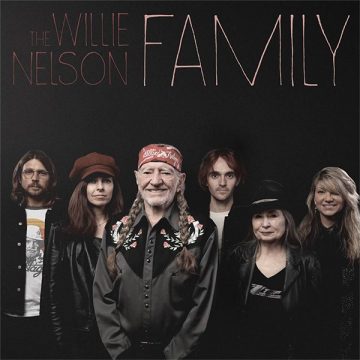 Even with all Willie Nelson fans there was always a sense of familiarity whenever one of the greatest country (and other music) stars releases a new album. They would always know to expect that unmistakable voice, sense of melody, or impeccable way of dealing with cover songs.

Yet every time Willie Nelson is able to throw in something that would make a difference between any particular recording. It could be the choice of tunes, collaborators, or anything else. Usually, that ‘anything else’ makes the difference as it is something that is not easily defined but goes under that category that encompasses almost everything – ‘the feel’.

No change there with his latest recording, The Willie Nelson Family. You get Willie in his purest form covering a diverse material that could go under the heading of gospel, whether it was his songs or something coming from a rocker like George Harrison.

As the title suggests, Nelson brings his musical family aboard, sister Bobbi Nelson, sons Lukas and Micah Nelson, daughters Paula and Amy Nelson. But that family tag has a much broader meaning for Willie, as it includes his long-time band members.

And again, throughout the album, you get both that sense of familiarity and that ‘feel’ of something different, special, if you will. This time around, it could be the emotion involved, particularly felt on the rendition of George Harrison’s “All Things Must Pass” with Lucas Nelson taking on the lead vocals, with the song still having that Willie Nelson spirit and feel all over it and just adding to the fact that The Willie Nelson Family becomes another essential Willie Nelson release.

Formerly a lot of things, including a journalist and a translator, currently a freelance writer living in The Netherlands.
RELATED ARTICLES
album reviewalbum reviewslegacy recordings
9.0