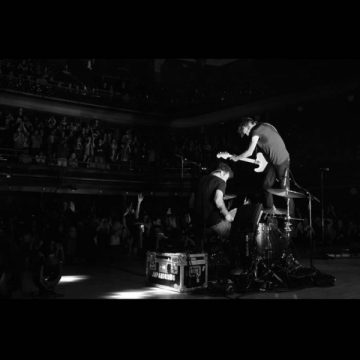 If you saw Japandroids live prior to 2017, chances are it would have been in a modestly-sized, yet uncomfortably rammed room, and you probably left having lost 10 lbs in sweat alone. In the five years between touring, their critically-adored Celebration Rock, and doing the same for its follow-up Near to the Wild Heart of Life, the Japandroids fan base swelled significantly, and the duo found themselves playing sold-out shows in much bigger venues. In October 2017, they accepted the challenge to play Toronto’s historic Massey Hall. The 2700-capacity, all-seated theatre being far away from the claustrophobic sweatboxes of the band’s past. The end product was a video recording for the Live From Massey Hall series, and now, over two years later, the live album Massey Fucking Hall. All three of the band’s studio albums are represented throughout Massey Fucking Hall, but clocking in at just one hour long, including song intros, the whole thing does feel somewhat rushed.

Songs such as “Sovereignty” and “Younger Us” are still completely electrifying delights, and this version of “Heart Sweats”, beginning with the opening lyrics of “1970” by the Stooges, is a fun Easter Egg. The quality of the recording is polished and slick, but overall, it falls short of capturing the feeling of rock ‘n’ roll catharsis that is integral to the live Japandroids experience. Even between songs when the audience can be heard, it isn’t rapturous, and there’s very little atmosphere there. It is commendable that the band took themselves out of their comfort zone for the challenge of filling Massey Hall with their sound, especially given that are just a duo. Guitarist Brian King acknowledges towards the end of the recording that he and drummer David Prowse were “really, really nervous”. A live album recorded in a space with such history should become an instant classic, as iconic as the venue itself, however, there isn’t much special about this performance. King and Prowse are such incredible talents and the songs will always be euphoric and anthemic, but this is not the perfect showcase for them.

The double LP version of the album is due out in October, and will be a welcome addition to any fan of the band’s collection, but if you’re looking for an introduction to Japandroids, start with the studio output.

Kirsten Inneski was born and raised in Scotland but fled to Canada in 2016, settling in Toronto in order to have the opportunity to see bands who rarely, if ever, make it to the UK. If her mum asks, however, the official party line is "Kirsten moved 3000 miles away from everybody she knows and loves for the totally rational reason of pursuing career in her field of TV production". Inneski writes, daydreams about making music videos she will never have the budget for* and obsesses over music and comedy, all while trying to make pals with everybody. *Eccentric billionaires can hit her up on Instagram.
RELATED ARTICLES
album reviewalbum reviewsarts & crafts
10