SPILL FEATURE: INTO THE BLACK – A CONVERSATION WITH DANIEL GRAVES OF AESTHETIC PERFECTION

A CONVERSATION WITH DANIEL GRAVES OF AESTHETIC PERFECTION

Into the Black, Aesthetic Perfection’s 5th full-length studio album (the first one in 5 years!), saw the light of day last month via Close to Human Music, the independent record label of A.P. frontman / everything guy Daniel Graves.

The ten-track limited-edition album, marked by L.A.-based producer Graves’ stylized vocals, is complete with distortion in all the right places and sound with elements that range from synthpop to heavier tracks, a sound he has dubbed “industrial pop”, which seems to me to be a good description.

The album cover gives a hint of what lies within its grooves. Graves is dressed in a clergyman’s cassock, holding a thurible, silently screaming into the dark forest…not quite looking like your neighborhood church’s cleric…unless your preacher is father goth, complete with horror movie-esque makeup, who hangs out in foggy, spider web-y forests and reads tarot cards.  The card itself, the Heirophant upside-down, signifies nonconformity, willingness to take risks, rebellion….all things anarchy…or an abuse of power or an authority figure who takes advantage of his or her position.  Intriguing, to say the least. 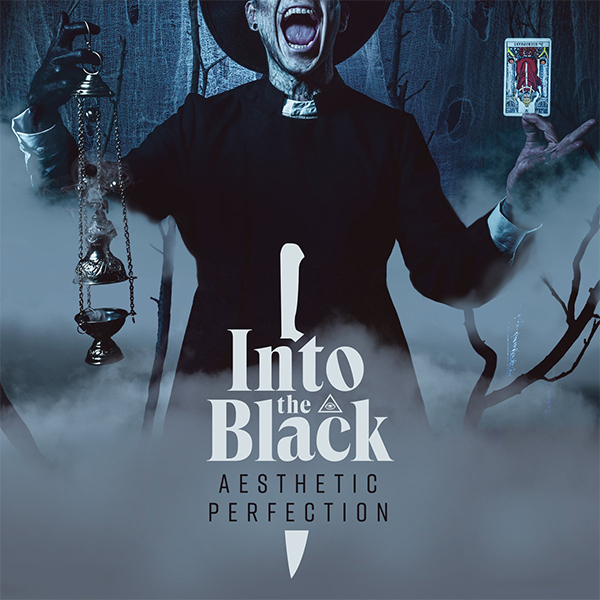 PURCHASE INTO THE BLACK VIA BANDCAMP

Seven of the ten tracks on the album have some sort of ‘supernatural’ reference, which seems to go along with the image on the cover.  “I’m not purposely making any comments on the Catholic church or anything like that, but I grew up in an incredibly religious household and I was punished for dabbling in anything that could be considered ‘occult’ or just anything that wasn’t ‘of God,’” says Graves.  “It was really kind of a troubling time for me and I think it was just something that I didn’t really address or realize…it’s just kind of going back and looking at my childhood and all of those experiences and seeing how deeply I was affected by religious dogmatism. It’s been an interesting journey going from being a devout evangelical Christian to an unabashed atheist and there’s a whole lot of hell, for lack of a better word, that you go through trying to come out of a life like that and when you finally break free from all of what I felt was religious oppression and maybe open your eyes to a secular world, the allure wears off quite quickly because you start recognizing that there’s not a whole lot of intrinsic purpose that exists in a meaningless world and I’ve struggled to find meaning and purpose in a worldview that doesn’t offer it,” he continues.

Opening the album with “Gods and Gold”, featuring Richard Z Kruspe, guitarist of Berlin’s Rammstein and frontman of Emigrate, is just the first track of many that demonstrates Daniel’s impressive vocal range, when he switches between smooth singing to a harsh, hard-edged sound.  Additional tracks on the album make use of a range from typical industrial music to a dancey, techno-feel sound along with a good amount of vocal distortion, some of which is used along with a catchy beat (a la “Wickedness” and “We Wake Up”).  “Echoes” is a collaboration with Jinxx, rhythm guitarist, violinist, cellist, pianist, lyricist, songwriter, and composer of American rock band Black Veil Brides that has pretty simple, but meaningful lyrics, and “We Wake Up” features both Jinxx and Krischan Jan-Eric Wesenberg of Germany’s Rotersand.

It seems that Into the Black as a whole is certainly recognizably Aesthetic Perfection, but taken to a new level.  The tracks are all over the map when it comes to style, but it works. One of the things that I found really interesting was the charitable causes Graves has supported over the years (including Planned Parenthood and “Electronic Saviors: Industrial Music to Cure Cancer”, a project whose proceeds go to a cancer recovery foundation) with his music. In response to a question regarding that, he said “This album is kind of the culmination of everything so far, I’m really proud of it, now I’m interested in trying to make the world a better place…thinking ‘how can we use our platform to do some good?’”  I have to respect that.

Kathy Nichols, from the land of cheese and beer, has been writing off and on since elementary school. Her passions include hugging trees and trying to make a positive difference in the world, to which end she completed a degree in Mass Communications coupled with Environmental Science. Kathy appreciates all types of music, mainly industrial and punk and the like (especially bands who use their fame and fortune to try to make social or political statements), but with a little bit of Beastie Boys and Billie Holiday thrown in to switch things up a bit. She is the owner and CEO of www.industrialstrengthpublicity.com and enjoys long walks on the beach and (skinny) puppies.
RELATED ARTICLES
aesthetic perfectiondaniel gravesfeatures