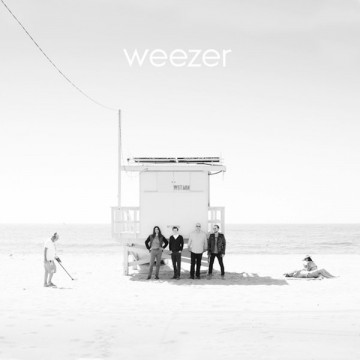 Weezer’s presence in the music industry has been an up-and-down success story of pop-punk fluctuation. Their original body of work (including their first two records, released in the ‘90s) stands out as some of the most influential of its genre – giving birth to follow-up acts like Blink 182 and Sum 41. Like most artists of this nature, though, Weezer had trouble finding balance with their future works and have practically faded from view since “Beverley Hills,” the wildly popular single released back in 2005. No, they haven’t been on hiatus for 11 years, but they have had trouble finding solid ground again.

With their self-titled (but also titled The White Album) effort, Weezer is brought back to earth. As the cover would suggest, the band has made a summer-in-Malibu kind of record, chalked full of upbeat pop tunes that feel somewhat youthful while flexing a bit of their justified maturities. That kind of balance can only be achieved by artists who have been in the industry as long as Weezer has. The result is something to be celebrated.

Weezer finds their place with their toes in the sand, easing up on exploring deeper topics and instead riding over easy tunes with simple, confident lyrics and fun arrangements. The songs lie in a hazy time zone between the ‘90s and the current day, remarkably representing both styles without compromising one for the other. “Do You Wanna Get High?” is the main showcase for this era-blending method. With distorted electrics over Cuomo’s angsty, yet pre-pubescent-sounding, voice. The track sounds as close to “Say It Ain’t So” as these guys have gotten in years. The creators of Rockband should have their ears perked up. These traits run consistent throughout the record’s duration, but not in a tediously repetitive manner. The danger with going the route Weezer has here is trading in old nostalgia for inspiration and creativity. This initial worry is masterfully challenged with the occasional mix-up. The most prominent of which is found on “Summer Elaine and Drunk Dori,” whose big bass hums leave listeners more than satisfied when the chorus semi-crescendos at the song’s end. While keeping their individuality, each track is truly a portion of its larger piece. That note is probably the most important.

What has been created here is the perfect, summer road trip record. Weezer are all sunshine and no rain on this perfectly pure White Album. Never has a self-title choice felt more justified than on Weezer. Taking their music back to its starting point 20 years after truly gives them the free, uninhibited initiative to make something wonderful happen. While they probably cannot continue to rely on this method for their next effort, the band takes it as a day at the beach instead of a romp in the real world. And that’s a success story in itself.

Robert Defina is an avid critic both on paper and in person. He spends more time writing album reviews than he does worrying about his future. He hopes that this sort of procrastination never grows old.
RELATED ARTICLES
album reviewsatlantic recordscrush music
9.0