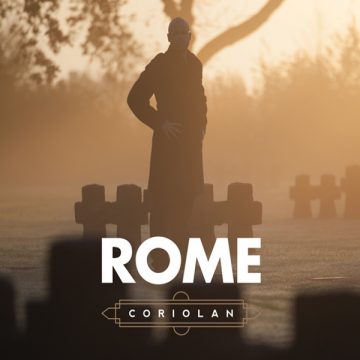 Rome’s Coriolan is a grab bag of different musical genres and types. From the opening “Investiture,” which sounds like an old-time war march, to the closing, “Funeratio,” wrapping things up with a choir-sounding chant. Although it doesn’t all fit into one seamless flow, it still fits together well.

Rome is a one-man band consisting of Jerome Reuter and his creative mind. He’s known for his post-industrial work, using different clips and “rootlessness,” as he describes it, to create unusual sounds, and combining songs on albums that may not work if other artists were to make the same attempt.

Although it seems like there’s nothing really connecting the songs on this album, there is a bit of a story to be told thorough the music. There’s the big intro, the action-packed and high-energy songs, and a slow mournful ballad, all telling different chapters within the tale. It makes sense since the album’s title, Coriolan, is an alternative spelling for the Shakespearian play, Coriolanus. The play is considered to be one of Shakespeare’s final dramas and follows the Roman Emperor Caius Marcius Coriolanus, who gains military success, pursues politics, and comes to his ultimate demise as a result of the relationships he makes along the way.

Reuter mentions in some of his songs once-strong military allegiances having fallen and the lack of remorse; themes that don’t have to be strictly pinned to Coriolan. After all, how many wars have had alliances broken or political figures lacking empathy?

Overall, the mismatch of songs makes for a great album.

Music and writing have always been a big part of Sabrina's life. She would "borrow" her dad's rock and metal CDs from his collection and listen to them while going through the art books. Although she doesn't write angsty poetry anymore, she does have a Bachelor's Degree in Journalism which she uses to pursue a creative career path. When she's not writing, Sabrina can be found juggling a coffee cup and DSLR or Instagramming her food.
RELATED ARTICLES
album reviewsrometrisol music group
9.0