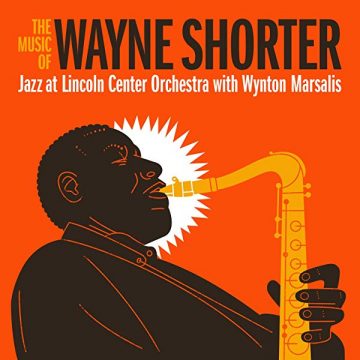 Wayne Shorter is among the few remaining musicians from the golden age of jazz. At the age of 86, the legendary saxophone player and songwriter has returned with his first album since 2018’s Emanon. The Music Of Wayne Shorter captures a series of concert recordings from 2015, when Shorter joined the Jazz at Lincoln Center Orchestra with Wynton Marsalis for three remarkable nights. As a result, The Music Of Wayne Shorter is a surefire master class in jazz performance for the modern age.

Opening with “Yes Or No”, the listener is welcomed with the rich, warm, and lush sonic soundscape that can only come for a large jazz ensemble. The upbeat swing of the song is contagious as a flurry of horns dance around the rhythmic hooks and motif. With a slight cinematic feel, “Yes Or No” is a perfect opener for The Music Of Wayne Shorter. The album continues with the slow burning and gentle ballad, “Diana”. The contrast between the two songs is immediately heard and demonstrates a certain depth to the immense musicality that is on this stage.

As The Music Of Wayne Shorter continues forward, listeners will be floored by the collective musicianship and talent in both the performance but also the adaptations which have breathed new life into these classic jazz numbers. Whether it is the soft yet powerful mediation of “Contemplation”, the saunter of “Endangered Species”, the ominous dissonance of “Armageddon”,  or the up-tempo bounce of “Mama ‘G’”, The Music Of Wayne Shorter captures a truly stunning performance on record and can stand among some of the greatest live jazz albums in recent memory.

The Music Of Wayne Shorter is a true musical odyssey that celebrates the life and music of Shorter with an incredible ensemble. Furthermore, the fact that Shorter is a performer on the record makes this tribute even more of a special affair. Through the course of its ten tracks, The Music Of Wayne Shorter proves to be an essential for fans of Shorter, Marsalis, and for fans of jazz as a whole.