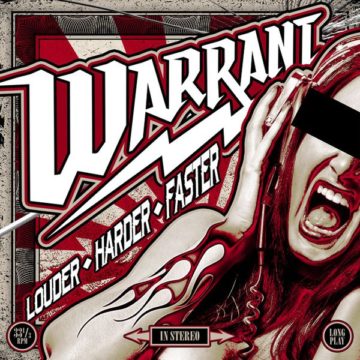 1980s glam rockers Warrant are back with Louder Harder Faster following a tumultuous run through the 2000’s.  Over the course of the previous decade, the band behind the quintessential 1980’s hit “Cherry Pie” had split with founding member and lead vocalist Jani Lane, during which time they released Born Again with Jamie St. James on vocals.  Shortly after, they reunited with Lane for a brief twentieth anniversary stint in 2008, and splitwith him again later that year.  Sadly, Lane would pass away due to alcohol poisoning on August 11th, 2011.  Earlier that year, however, Warrant would release their second album without Lane on vocals; Rockaholic was the band’s first with new vocalist, Robert Mason. Since then, little has been heard from the hair metal legends aside from a handful of tours.  Louder Harder Faster looks to break that silence with its obnoxiously cranked up amps and devil may care attitude which made the Sunset Strip scene so appealing in the first place. The album also features a return of Mason on vocals, making this record, in some regard, Warrant’s sophomoric attempt in their comeback from a decade which truly was not kind to them.

As the title suggests, the opening track “Louder Harder Faster” sends the listener from zero to sixty in no time at all. From the opening riff, the title track sets the tone for the record with its larger than life opening and multiple guitar solos that are all nothing short of impressive. While “Louder Harder Faster” is a pure testament to the 1980s style of in your face rock ‘n’ roll with a flair for the technical musicality, the second track, “Devil Dancer”, is where Warrant demonstrates their ability to write a rock song with a little more depth and slightly more in the modern vein of the style. This is probably what is most interesting about Louder Harder Faster; it is clearly an album with its roots in 1980s glam rock, but it often fits in with modern rock, showing how well Warrant have aged. Probably the best example, musically and lyrically, comes from “Only Broken Heart”, a song which tells the story of the consequences of living the mantra of sex, drugs, and rock ‘n’ roll.

While much of Louder Harder Faster has showcased Warrant’s capabilities of recording a rock record that fits nearly seamlessly in line with current bands of the likes of Alter Bridge and The Pretty Reckless, the band cannot seem to shake the power ballads which send them right back to the ‘80s.  This would be, in my opinion, one of the biggest, albeit few, drawbacks to Louder Harder Faster. Songs like “Perfect” and “U In My Life” feel dated and slightly cheesy for this reason. This however, does not stop Warrant from delivering a solid and fun hard rock record.

Louder Harder Faster is a strong contender for Warrant’s return to prominence among today’s rock scene.  The band is in top form, as all the guitar solos will tell you, along with the impressively interwoven melodic guitar parts, and Mason’s voice is confidently at the forefront.  Louder Harder Faster is a great example of a straight up rock record from a band who peaked in the ‘80s returning with a vengeance. Warrant delivers everything they promise with the album title, save a few ballads, in a fashion that actually outshines their peers who have also tried to make a comeback from the 1980s.  With tracks of the likes of “Louder Harder Faster”, “Music Man”, and the blistering “New Rebellion”, it is clear that Warrant are refusing to release an album which runs off a simple nostalgia trip that is bound to leave long-time fans rushing for their classic albums, but rather Louder Harder Faster will leave old and new fans satisfied with its raw rock and  roll energy.

A passion for music has always been a part of Gerrod’s life. As a young boy, he was raised on a steady diet of the music from The Chili Peppers, Aerosmith, The Stones, Prince, and others from his mum. Raised in the GTA, Gerrod continued to foster his love for music by attending a wide range of concerts and learning the drums. His unapologetic passion for music has no bounds and has spread to a wide variety of styles, whether it be the 90’s rock that sound tracked his teenage years, the jazz he studied in university, or his newfound love for hip-hop. He recently received his bachelors in music and education from York University and is passionate about writing and reviewing good (and less than good) music. Gerrod is also the drummer and songwriter for a Toronto based rock & roll band, One In The Chamber.
RELATED ARTICLES
album reviewsfrontiers music srl
9.0