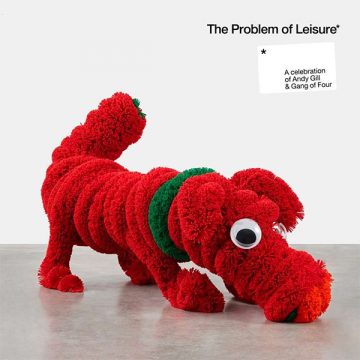 Various Artists
The Problem of Leisure: A Celebration Of Andy Gill And Gang Of Four
Universal Music

The Gang Of Four were not only the most important post-punk band of its time, they stand as one of the most important bands of all time. Their ability to combine socio-political lyrics with powerful music created songs that challenged the authority then and now. And they did it with such style. They influenced generations of musicians and their music has not only stood the test of time, but is probably more relevant today than it was when they first recorded those classic albums. And they continued to create brilliant music when they reformed up until last year, when key member, and co-founder,  Andy Gill suddenly and unexpectedly passed away. It is surprising that it has taken this long for a tribute album such as this to be released.

The Problem of Leisure: A Celebration of Andy Gill and Gang of Four (the title of the album comes from the lyrics of the song “Natural’s Not In It”) was originally conceived by Gill,  not as a post-mortem tribute, but to mark the 40th anniversary in 2019 of Gang Of Four’s classic and groundbreaking 1979 debut album Entertainment! But Gill changed the focus after some artists chose tracks from different albums and periods. Every musician who committed to the project was given the freedom to create new versions of whichever Gang of Four songs they wanted to cover, with Andy overseeing some of the earlier productions but largely leaving artists to create their own interpretations. This means that there are two versions of some songs as Gill was not a believer in censorship.

Elsewhere Gary Numan and Ade Fenton take “Love like Anthrax” in a direction Gang Of Four never intended, but again, it works and is a fitting tribute to the band and song. Helmet returns with their first new music in five years with a convincing cover of “In The Ditch” and Gail Ann Dorsey provides a remarkable cover of “We Live As We Dream Alone”, featuring her trademark bass and wonderful vocals.

There are a number of artists here who pay back their debt to Gang Of Four. The Dandy Warhols, Flea and John Frusciante, Warpaint, Hotei all turn in fine performances of the classic songs. But it is the appearance of Gang of Four that steals the show. Killing Joke’s remix of “Forever Starts Now” is incredible. Killing Joke reinvented the song with Gang Of Four, and although it is not better than the original, it stands up to it. The same can be said of 3D, who along with Gang of Four and Nova Twins have turned “Where The Nightingale Sings” into a bit of an audio nightmare. This is not a complaint, as it brings aspects of the song into the light that had not been heard before. It is wonderful.

Where the album doesn’t work (such Herbert Grönemeyer ft. Alexa Silva’s version of one of Gang Of Four’s best known songs, “I Love A Man In Uniform”, The Sounds version is far superior) the album lags but those moments are few and far between. Overall The Problem of Leisure: A Celebration of Andy Gill and Gang of Four is a worthy tribute to Andy Gill and the band. Gill’s wife, Catherine Mayer, finished the project after his death, and she has done an incredible job tackling this project. Since Gill’s death, a brilliant EP of music he had been working on with the band was released (“This Heaven Gives Me A Headache”) as well as a reissue of their first two albums (Entertainment! and Solid Gold) in a box set which included previously unreleased live material and demos. This album adds to those releases and serves as a fitting tribute. It should also be the starting point for those not fully aware of Gang Of Four. Idles fans would do well to go back to the originals and see where their band ‘borrowed’ many of their ideas.

Born and raised in Whitby, Aaron discovered music through his love of The Beatles. This led to a career in radio, writing for various publications, and ultimately a radio show about The Beatles (Beatles Universe), which ran for over four years. When not immersed in music, Aaron enjoys spending time with the loves of his life -- his wife Andrea, and daughters Emily and Linda (all of whom have an intense love of music too).
RELATED ARTICLES
album reviewalbum reviewsandy gill
9.0