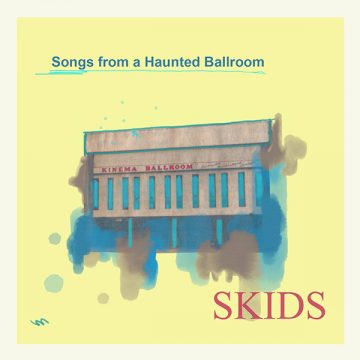 Despite reforming in 2018, Scottish punk band Skids seem to have been unfortunately forgotten. Having released two albums since reuniting, 2018’s Burning Cities and the 2019 follow-up, Peaceful Times, Skids are back at it with Songs From A Haunted Ballroom, a collection of covers that lives up to the style of the influential and short lived legacy of the late ‘70s/early ‘80s punk rock outfit.

Songs From A Haunted Ballroom opens with Ultravox’s 1977 song, “Young Savage”. Skids take on the up-tempo punk track with a faithful cover with a performance that sounds far bigger and defined, particularly the explosive chorus with its gang-vocals. Skids capture a raw and unchained energy on “Young Savage” that, even despite its modern mix, sounds as if it was unearthed from a lost studio session from ’79. In a bold move, the band takes on The Clash on “Complete Control” making for a fitting tribute to one of the greatest punk bands ever.

Throughout the course of its 14 tracks, Skids cover some of the most well-known and revered punk bands – from The Clash to The Stooges – to a number of more underground artists – including The Adverts, Magazine, Garland Jeffreys – making the album a curated tour de force of punk history. In an unexpected turn, the band covered Ace Frehley’s “New York Groove”, providing a slight shift in tone for the album. Skids also chose to close Songs From A Haunted Ballroom with a pair of their own songs, “Into The Valley” and “Christmas In Fife”, which demonstrate their own contributions to the punk genre, even beside some of the greatest hits from the style.

Songs From A Haunted Ballroom sees Skids pay homage to the punk rock of the ‘70s and ‘80s in tremendous fashion while also shining a light on some of the artists who’ve influenced Skids over the years. While they rarely, if ever, stray from the originals and mostly only cover punk rock, the album is a great celebration of the genre, performed, mixed, and mastered to sound absolutely massive and modern. That being said, it would have been interesting to hear Skids stray from the path, indulge in their own creativity, and even cover some unexpected music from other styles. Songs From A Haunted Ballroom is a strong covers album and should be a welcomed addition to their catalogue.

A passion for music has always been a part of Gerrod’s life. As a young boy, he was raised on a steady diet of the music from The Chili Peppers, Aerosmith, The Stones, Prince, and others from his mum. Raised in the GTA, Gerrod continued to foster his love for music by attending a wide range of concerts and learning the drums. His unapologetic passion for music has no bounds and has spread to a wide variety of styles, whether it be the 90’s rock that sound tracked his teenage years, the jazz he studied in university, or his newfound love for hip-hop. He recently received his bachelors in music and education from York University and is passionate about writing and reviewing good (and less than good) music. Gerrod is also the drummer and songwriter for a Toronto based rock & roll band, One In The Chamber.
RELATED ARTICLES
album reviewalbum reviewscleopatra records
8.0