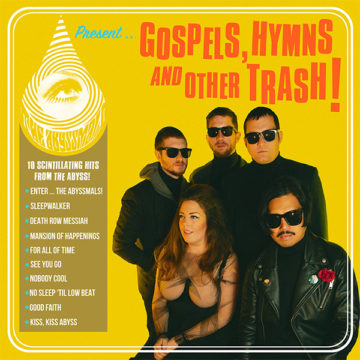 The Abyssmals
Gospels, Hymns And Other Trash!
Five Kill Records

The Abyssmals first full-band album Gospels, Hymns, And Other Trash! has a lot going for it, including album art and the look of a band that has arrived through a portal from the blackwater beaches of Transylvania.

The album’s brief opening track “Enter…The Abyssmals!” starts with an audio recording, fuzzy and staticky at first, as if we are finding them on the radio.  We hear a man saying, “Where we going, fellas?” to which another man’s voice replies, in Twilight Zone fashion, “Into a dimension of sound.” It’s an appropriate prelude, thrust as we are headfirst into mostly psychedelic vampire-tinted surf rock for the rest of the album. That being said, The Abyssmals, have a few tracks along the way (like “Nobody Cool”) that veer from the psychedelia of the first half of the album by bringing in elements of punk rock and metal. On one of the longest tracks of the album, “Good Faith,” there are elements of it that are reminiscent of certain Led Zeppelin songs.

Overall, while the central hook here is gothic psychedelic surf rock, as the album continues, it slows down at times and the sound changes form and we are able to see the other dimensions of sound contained within The Abyssmals impressive debut album.

Dan Kennard is an English teacher and fiction writer living outside Kansas City, Kansas where he lives with his wife and children. More about his work can be found at amazon.com/author/dankennard. You can also follow him on Twitter and Instagram @kennardistry or contact him at [email protected]
RELATED ARTICLES
album reviewalbum reviewsfive kill records
10