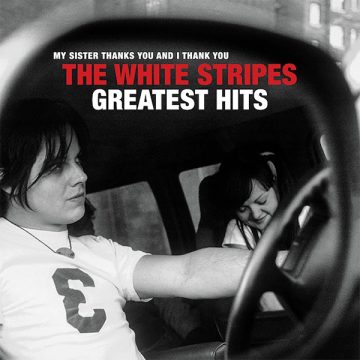 It happens to the best of the best of them–and the dynamic Detroit duo of Jack and Meg White, who performed under the moniker of The White Stripes, captivating the world with their blues-infused garage rock from the late ‘90s to the end of the aughts when they broke up, are no less deserving of having their best work collected in one shiny package and stamped with the greatest hits seal.

Of course, when it came time to put out a greatest hits album, simply titled The White Stripes Greatest Hits, they had to do it in typical White Stripes fashion–all coy and enigmatic, as the duo who fooled the public into thinking they were brother and sister were known to be. In this case, the tracklist has been kept a tight secret since the compilation album was announced until just last month, when all 26 songs were unveiled.

Tracking their careers from critical darlings to commercial successes, The White Stripes Greatest Hits mines all six of The White Stripes’ studio albums from 1999 to 2007  for obvious hits and fan favourites, including “Apple Blossom,” “Hotel Yorba,” “Icky Thump” and the instantly recognizable stadium anthem “Seven Nation Army,” which closes out the record.

It also contains the band’s debut single “Let’s Shake Hands,” as well as a handful of their well-known covers, such as their rendition of Dolly Parton’s “Jolene” and Corky Robbins’ “Conquest”, among others.

However, there are omissions that will inevitably make some ponder, “Why didn’t that make the cut?” “Black Math” and “Prickly Thorn, But Sweetly Worn” are both notably absent. And that’s the problem with greatest hits albums: everyone has their favourites but a line must be drawn somewhere.

With a band like The White Stripes, whose basic yet incendiary guitar-drum-voice methodology has produced such a consistent and spectacular discography, it’s hard to whittle down their work into one concise record of their undisputed best stuff, while at the same time, satisfying everybody.

While it may not blow any minds or offer new insight, this greatest hits album is a great excuse to retread the red and white, peppermint-candy-swirl era of The White Stripes, or to use as a starting point when diving into the iconic group’s music for the first time.