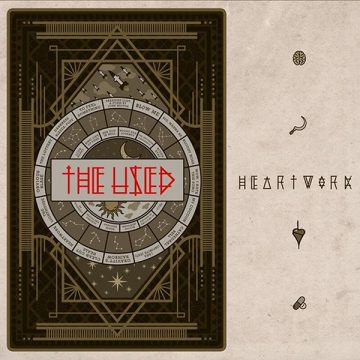 The Used have had nothing short of a spectacular run of a career since they first began to trailblaze the scene in the early 2000s with their 2002 release of their self-titled album. They would not only be well-received by music listeners but also would become one of the most influential bands in the alternative music scene for years to come after.

While the band has gone on an exciting journey throughout the years, changing their sound in the process, they never lost their creative edge and zeal. Lies for the Liars and 2004’s In Love and Death cemented a surprising change in the band’s sound but showed that something else internal conceptually was brewing under the surface. The Used were proving that they were capable of expanding while still containing the grit and heaviness of their predecessor.

This brings us to Heartwork (Deluxe Edition), a record that’s brimming with unique composition and nostalgic notes of their earlier albums we loved. Profound, wistful, and contentious, this only breaks the surface to describe half of the tracks added to the deluxe edition of  Heartwork.

Within this immense 27-atrack edition of the album, The Used shows their ability to shock-and-awe us with their emotionally intuitive lyrics and raw sense of vulnerability.

Moments like “Bloody Nose” and “Wow, I Hate This Song” are seething bangers. Melodically aggressive, they show us The Used are still the band we have come to love and adore. McCracken’s euphonious vocal control is superb on these tracks and possesses the replayability fans will be looking for from albums past.

Another gem on this album that takes centerstage is “The Brothers Karamazov.” A magnetic number on the album, it intermingles with the most infectious guitar melodies on the record. “River Stay” is another track of aural beauty that packs a punch instrumentally and lyrically.

What stands out about Heartwork (Deluxe Edition) is its ability to take us into different genre spaces in ways they had not previously in past albums. Expansive, fiery, and emotional all at the same time, The Used has crafted one of the best-defined album performances we have seen to date. While some may say that this deluxe edition sounds very much like two different works, and they are right to a certain extent, it’s also fair to mention that The Used have always been different in their approach to every album release. Separating the construction aspect of this from the tracks as a whole, Heartwork (Deluxe Edition) shows a level of diversity and ingenuity we have not seen in other albums. If this aspect can be overlooked, this deluxe edition is a great album.