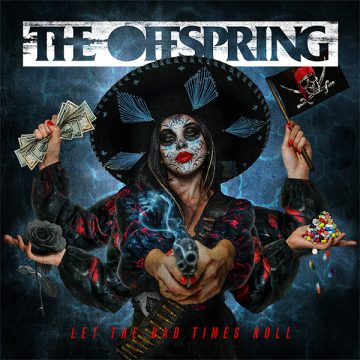 As one of the greatest selling punk band of all time, The Offspring have released their first album in nearly a decade. Let The Bad Times Roll, a record adorned with what is easily their greatest artwork, fails to make the waves that naturally comes with a nine year absence; rather Let The Bad Times Roll, unfortunately, falls significantly short as a hit and miss mess the feels equally tired as it is youthful.

Opening with “This Is Not Utopia”, you’d think the band replaced lead singer Dexter Holland with a lackluster fan who’s followed the band since their angsty teens. While Holland sounds in fine form with his signature nasally snarls throughout the rest of the record, his subdued performance and a questionable mix makes the opening song fall short, despite its unique verse. This course is corrected with the following title track, a throwback to The Offspring’s alternative punk roots while connecting to some of their latter work – think if “Why Don’t You Just Get A Job” and “You’re Gonna Go Far, Kid” had a lovechild. As one of the best songs on the album, “Let The Bad Times Roll” soars with a timeless energy, strong songwriting, and the quirky charm that has made The Offspring endure for almost forty years.

“Let The Bad Times Roll”, however, is certainly diamond in the rough. Over the course of its 12 tracks, The Offspring flounder with attempting to sound like a modern pop punk band, rather than setting the tone for the genre as they’ve done since the early ‘90s. Despite this, tracks like “Army Of One”, the big band accented “We Never Have Sex Anymore” (the spiritual sequel to their 1994 smash hit, “Self Esteem”), and “Breaking These Bones”, show an abundance of promise that The Offspring can rock as hard as they ever have without losing their unique and humorous voice as songwriters.

I really wanted to love Let The Bad Times Roll. Having stumbled on Smash in my teens – a solid 15 years after its release – The Offspring harkens a level of nostalgia that even I felt and connected with decades later. Had this album been half the length, Let The Bad Times Roll could have been a stellar EP; rather it feels tired, forced, and devoid of a level of fun associated with the band. While lifelong fans will find much to love, they’ll also be greeted with about as much to skip over. One thing remains certain, The Offspring are at their best when they’re ferocious, biting, self-loathing, and straight up funny; while these moments are fleeting on Let The Bad Times Roll, they’re present and more then worth it.

A passion for music has always been a part of Gerrod’s life. As a young boy, he was raised on a steady diet of the music from The Chili Peppers, Aerosmith, The Stones, Prince, and others from his mum. Raised in the GTA, Gerrod continued to foster his love for music by attending a wide range of concerts and learning the drums. His unapologetic passion for music has no bounds and has spread to a wide variety of styles, whether it be the 90’s rock that sound tracked his teenage years, the jazz he studied in university, or his newfound love for hip-hop. He recently received his bachelors in music and education from York University and is passionate about writing and reviewing good (and less than good) music. Gerrod is also the drummer and songwriter for a Toronto based rock & roll band, One In The Chamber.
RELATED ARTICLES
album reviewalbum reviewsconcord records
9.0