SPILL ALBUM REVIEW: BORING GIRLS – FUCK YOU SO MUCH 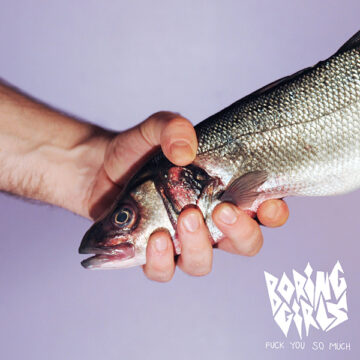 Boring Girls
Fuck You So Much
Tarantula Tapes

Hot off the heels of their third record since 2020, Montreal-based punk outfit Boring Girls have released Fuck You So Much. Released on cassette, via Ontario’s Tarantula Tapes, the five-track EP follows their 2021 release, Bad Mammals, that’ll turn heads for its raw and aggressive, old-school hardcore tone as it will for its title.

Boring Girls open their latest EP with “How Did We Get Here?” an abrasive and hard-hitting thrasher in tone with early hardcore punk from the ‘80s. Setting the tone for the remaining four songs, “How Did We Get Here?” makes up for its rough production with its sheer energy, before diving head first into the dissonant and grungy “Long Term Loser”. As one of the strongest tracks on the record, “Long Term Loser” is propelled by aggressive guitar lead lines that make for a unique and exciting song.

Fuck You So Much continues with “Dead Fish Grip”, a relentless track that is rocking punk banger that feels nostalgic for the genre’s earlier and grimier days. “Variation In Action” on the other hand, continues on the path explored in “Long Term Loser” as Boring Girls tread in grungy territory on their longest song and dig deep into what is their most refined example of songwriting. “Variation In Action”, along with “Long Term Loser”, feels very inspired by early Nirvana (pre-Nevermind), with both tracks showcasing the best Boring Girls has to offer on Fuck You So Much. The record comes to a climatic but brief close with “Adios Dolores”, a hardcore stomper that’s over before it truly begins.

Fuck You So Much is a five-track EP that clocks in at just over 10 minutes. In that brief amount of time, Boring Girls have cemented themselves as true disciples of early grunge and proto-hardcore punk, before both genres added in more palatable musical elements to them. While incredibly rough around the edges, Fuck You So Much is a sledgehammer to the side of the head that will leave you nostalgic for the early eras of both genres.

SPILL ALBUM REVIEW: BORING GIRLS – FUCK YOU SO MUCH