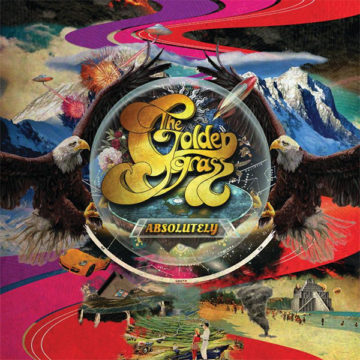 Brooklyn’s The Golden Grass – a psychedelic blues rock trio consisting of guitarist and vocalist Professor Plum Brandy, drummer and vocalist The Golden Goose, and on bass, The Fireball – have released Absolutely. After a handful of singles and two EP’s, Absolutely stands as the band’s first full length album and demonstrates that the band was destined for such longer formatting.

Like opening a time warp to somewhere in between the late 1960s and the mid ‘70s – post-Woodstock, pre-Van Halen (1978) – Absolutely opens with the loose blues of “Catch Your Eyes”, which is driven largely by the song’s use of rhythmic shots and a ripping slide solo. Quite contrastingly, the following track “Show Your Hand”, picks up on both a heavier and groovier note, ending on a darker tone with a short but fiery guitar solo. The musicianship between the three members is that of a band who have cut their teeth together over a long period of time; in short, it has been quite some time since I have heard such a tight new rock band.

There is no doubt that The Golden Grass have a sound reminiscent of classic rock’s golden era; however, rather than coast on nostalgia for a time long gone, Absolutely showcases a modern and innovative take on classic rock. Within the genre itself, The Golden Grass exemplify a number of traits from an array of streams, including a classic blues rock sound on the opening track and the shuffling “The Spell”, a touch of Hendrix on the standout track “Runaway”, along with hard hitting crunching numbers like “Begging The Question” and the climatic closer “Out On The Road”. The Golden Grass prove that they can not only write catchy and sophisticated tracks, but can also maintain the listener’s attention as they engage in sections that feel like a live jam in the studio. While the band is likely to get compared to artists of the likes of The Allman Brothers, Mountain, and Grand Funk Railroad – all of which are well deserved – there is a sense within the band’s riffs, structures, and seamless use of the blues, that likens The Golden Grass to early Black Sabbath without the doom and gloomy tone that allowed for the band to pioneer metal.

Absolutely is an incredible record from The Golden Grass. An instant and modern classic, partially due to the band’s genre, but largely due to the quality of their recorded performance and song writing, The Golden Grass are a band to watch out for in what appears to be a classic rock revival led by the likes of Greta Van Fleet.  It is safe to say that Absolutely is a record that can very well give The Golden Grass the momentum to aid in leading this movement with a sound that is undeniably vintage.

A passion for music has always been a part of Gerrod’s life. As a young boy, he was raised on a steady diet of the music from The Chili Peppers, Aerosmith, The Stones, Prince, and others from his mum. Raised in the GTA, Gerrod continued to foster his love for music by attending a wide range of concerts and learning the drums. His unapologetic passion for music has no bounds and has spread to a wide variety of styles, whether it be the 90’s rock that sound tracked his teenage years, the jazz he studied in university, or his newfound love for hip-hop. He recently received his bachelors in music and education from York University and is passionate about writing and reviewing good (and less than good) music. Gerrod is also the drummer and songwriter for a Toronto based rock & roll band, One In The Chamber.
RELATED ARTICLES
absolutelyalbum reviewsbrooklyn