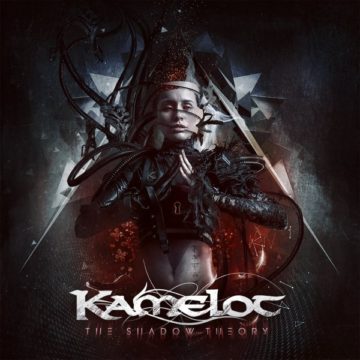 Euro-American rockers Kamelot are back at it again with their latest release The Shadow Theory. The highly anticipated follow-up to their previous release Haven delivers a more polished collection that is still jam-packed with grandiose dramatic flair and thematic lyrics that Kamelot fans crave.

The album kicks off with their first single “Phantom Divine (Shadow Empire)”. This is an instantaneous hit that is immediately infectious. The chorus will stay with you for days for all the best reasons. Lead singer Tommy Karevik is in fine form throughout this album. His passion and magnetism paired with his haunting voice is inherent not only in the video for “Phantom Divine” but clear throughout the recording. This song also features Lauren Hart from the death metal band Once Human on guest vocals. She has a great talent for both clean and demon vocals and she uses both to great effect paired and contrasted with Karevik’s voice.

Narrowing down a few highlight tracks off this album is hard as they’re all great offerings in their own way. The latest single “Amnesiac” is a solid song featuring an intensely heavy and driving bass line from bassist Sean Tibbetts that kicks off the song and leads into guitarist Thomas Youngblood, who also delivers a great guitar solo on the song “Kevlar Skin”, doing what he does best. Once again, the chorus here is an earworm waiting to happen.

These next tracks stand out due to their uniquely symphonic melodies that are just beautiful. “In Twilight Hours” is the power ballad to end all power ballads. Featuring the ethereal vocals of Jennifer Haben from Beyond the Black, the duet is rich and emotive.

Upon the first few chords of “Static”, I knew this would be one of those songs I’d play on repeat. The melodies here soar and pull on emotional heartstrings while it still holds up as a perfectly solid metal track.

“Vespertine (My Crimson Bride)” and “The Proud and the Broken” are songs that bring me right back to the hay day of Kamelot when their former front man Roy Khan was at the helm of the ship. The lyrics here are richly poetic and reminiscent of old fantasy realms.

The album as a whole is one of the strongest metal albums I’ve heard this year. The arrangements by Youngblood are topnotch throughout. There is not a poor or weak song on this album. As with all albums, certain songs will speak to individuals more than others, but every song here, including the instrumental intro and outro, are impeccably crafted and stunning.

Kamelot have outdone themselves with The Shadow Theory and this will certainly be known as one of the band’s best albums and if not the best album of the current Tommy Kerevik era. It’s hard to say if this is a themed album but the consistent vein that permeates its whole of this album is the idea of technology taking over the human mind which adds a whole other unique layer of enjoyment and exploration to the album.

Samantha is both a writer and a fan of the arts and has been able to find numerous ways to pair the two. Eager to dive head first into writing for Spill, Samantha is an avid partaker and reviewer of live art in Toronto serving as an editor at Mooney on Theatre exploring live local theatre, she's a photojournalist for Go Globehopper, a travel, dining and tourism blog that focuses on Toronto and abroad and previously for Lithium Magazine. She's passionate about music, theatre, photography, and writing -- not necessarily in that order. She drinks tea more than coffee, prefers ciders over beers, and sings karaoke way too loudly. You can follow her on various social media including Facebook, Twitter, and Instagram.
RELATED ARTICLES
album reviewalbum reviewskamelot
8.0