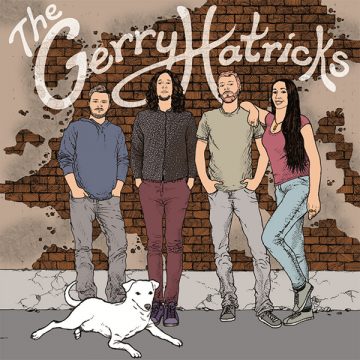 Hailing from the quickly growing – and truly diverse – music scene of Winnipeg, Manitoba are The Gerry Hatricks, an acoustic, folk-rock-meet- punk four-piece outfit that evolved out of singer-songwriter Gerrit Delaquis’ solo album, 2018’s Clam Cloud. The new project has now made their debut with their self-titled full length album, The Gerry Hatricks.

Opening with the funky riffs, rhythms, and all round interaction between a warm acoustic guitar and the bass on “Whipped Cream Hat”,performed by Kyle Halldorson of Winnipeg progressive rock outfit, Dizzy Mystics , listeners should be immediately pulled in by the sheer innovative nature and quirkiness of the track. It may seem like some good fun, but it’s unlike anything else out there. On the other hand, “Sean Perrun” offers a more traditional roots rock structure and sound – with the exception of some jazzy chordal choices and some tasty guitar licks – and, while more straight ahead in songwriting, the band clearly knows how to take what is expected and spice it up in, once again, ways that are unique.

“PB Jam” takes a punk and blues approach to an almost Americana foundation which further varies the sound on the album. This is especially so when considering “Concrete” is a jazz fusion meets progressive rock odyssey and “Together We’ll Land” is a complete musical journey that is a definite songwriting achievement that pushes all traditional boundaries and expectations aside. It is clear with “Together We’ll Land” closing the record, that The Gerry Hatricks aren’t simply interested in fusing genres together, but as songwriters are willing to truly push themselves and their artistry to the limits.

One album in and it is clear that The Gerry Hatricks have found a sound that is distinct to them. The Gerry Hatricks is a truly unique and innovative musical experience that refuses to play it safe. As a result, the album, while based around the structures and tones of folk and roots rock, dabbles in jazz, punk, funk, and modern progressive rock elements. Simply put, no one else seems to be elevating the modern folk scene with such colours and tones.