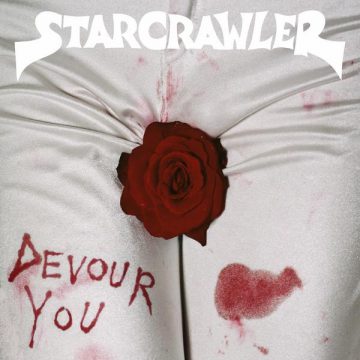 Starcrawler, called by some ‘the saviours of rock’ — even though I’m not at all sure they’d want to be — emerged as a high school band in 2017 and quickly came to prominence in the LA grunge/punk scene. This is a very visual group: take the blood drooling excesses of Gene Simmons, add a hospital gown and a twist of Iggy Pop, and you get Starcrawler.

They are a hard band to box, as I think they would be pleased to read! I could see them gaining a punk following, and interest the grunge crowd, but this would undermine the blues edge provided by the guitar work of Henri Cash (a name to watch for) and the melodic riffs that his guitar provides.

Musically there is a lot of depth in this, their second album. It is experimental, yet has a real maturity to it that belies the fact that this is still a band largely in their teens.

There are a couple of real standout tracks. As an introduction to this band I would check out “No More Pennies”, or “Bet My Brains”. There is a striking video promotional for “No More Pennies” as well, and I would have made this an album opener. The concept for “Bet my Brains’ comes from the New York Tunnel People and those living under the sewers in L.A. It lyrically spits bullets and is a vehicle to promote the vocals of Autumn de Wilde.

Autumn, a 6 ft 3 lead singer, willowy, acid blond, and vocally distinctive is the sound this band will become identified with, along with her stage presence. In my view she (and this band) have the capacity to really break through. I notice they are coming to my home in the UK in June, and after hearing this I will be checking them out. I’m absolutely sure that L.A. will not contain this band, they will step up onto a wider stage very soon.

As for the album cover, the juxtaposition of the red rose on the white trousers, blood on the crotch, vampire rock indeed.

The Spill Magazine is a Toronto-based online publication dedicated to covering the independent music scene with a strong focus on our thriving hometown talent. Our writers bring you up-to-date news, in-depth features on musicians and reviews for the latest CD releases. We also travel to the front lines for all local festivals including Canadian Music Week and North by Northeast. Don’t forget to check out our Facebook and Twitter pages for all daily Spill updates.
RELATED ARTICLES
album reviewalbum reviewsrough trade
9.0