SPILL ALBUM REVIEW: LIFE OF AGONY – THE SOUND OF SCARS 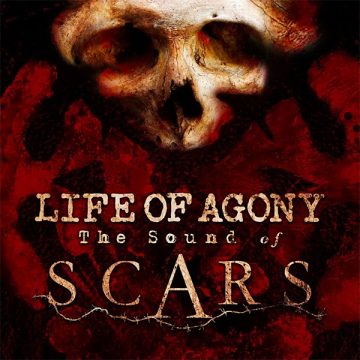 Life Of Agony
The Sound Of Scars
Napalm Records

Since the beginning of its career, Life Of Agony has merged hard rock elements with influences of the prominent New York hardcore scene and quickly developed a distinguished sonic aesthetic. As a result, they toured relentlessly and shared the stage with acts such as Metallica, Ozzy Osbourne, and Foo Fighters.

The Sound Of Scars, their sixth studio album,proceeds the concept behind their critically acclaimed debut River Runs Red—a hard-hitting, head-banging and dynamic alt-metal record— which tells the story of a troubled Brooklyn teenager who sought to end his own life. Continuing to explore the same story as told in their premier work, their latest offering features compelling lyrics, colossal guitar riffs, and vigorous drum grooves.

The record kicks in with the 32-second “Prelude”, a twisted snippet that references the last track on River Runs Red; the sound of dripping blood indicates a gruesome occurrence, the protagonist no longer lives. The second tune, “Scars” starts with a displaced rhythmic pattern played in unison and  followed by a scintillating siren sample that bursts into the verse:

“On your throne,
All alone,
All have flown,
Broken bones
As you sit and you wait I’m not waiting.”

On “Lay it Down”, a pulsating bassline supports powerful operatic melodies that move the tune forward and leave space for guitarist Joey Z’s chops to shine. Other notable moments are on “My Way Out”, “Stone” and “Weight Of The World” which showcase emotional lyrics and blend catchy chord progressions that resemble bands such as Face To Face and Agnostic Front.

Life Of Agony presents a pleasant aural journey in The Sound Of Scars for both the casual listener as well as die-hard fans. After 26 years together, the band doesn’t show any signs of slowing down and still brings a fresh perspective to the table displaying a lot of originality and warmth.

SPILL ALBUM REVIEW: LIFE OF AGONY – THE SOUND OF SCARS

The Spill Magazine is a Toronto-based online publication dedicated to covering the independent music scene with a strong focus on our thriving hometown talent. Our writers bring you up-to-date news, in-depth features on musicians and reviews for the latest CD releases. We also travel to the front lines for all local festivals including Canadian Music Week and North by Northeast. Don’t forget to check out our Facebook and Twitter pages for all daily Spill updates.
RELATED ARTICLES
album reviewalbum reviewsnapalm records
8.0