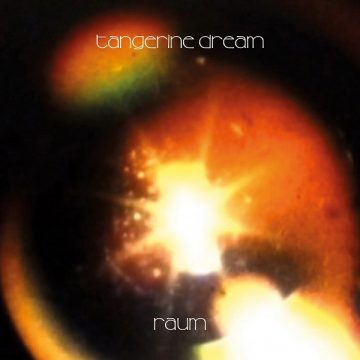 Edgar Froese formed Tangerine Dream in 1967, and through all of the incarnations of the band, remained the one constant member until his death in 2015. This is the band’s second album since is passing, and it is worth pointing out that it is their 79th studio album, keeping in mind they released an additional 34 soundtracks and over 100 live album, so the new lineup of Tangerine Dream have a great deal to live up to.

Raum follows on the heels of the E.P. Probe 6-8 released last year. Once again, the trio had access to Froese’s archive, which includes recordings and arrangements. So, in a sense, Froese is actually part of this.

Raum opens with a 19-min sonic epic, “In 256 Zeichen”, an incredible sound collage with layered loops and synthesizers. It is actually very melodic and engaging. and it draws the listener in. The ending, however, is a frantic rendition of the song, making excellent bookends.

Tangerine Dream does not recreate its trademark sound or attempt to break away from what it does best, and that is just fine. The five tracks between the opening and closing s are electronic landscapes, ambient at times but always with a hint of a strong melody. The use of patterns, such as in “Continuum” lays a solid foundation for the other sounds to come and go. It is a wonderful song.

After all of these years, there is still a lot for this band to accomplish. The use of Froese’s music is a stroke of genius and lets the band to continue to exist with its founding member, but the use of ‘found’ sounds and classic synthesizers elevates it to more than a mere instrumental to a fantastic, creative force that is felt as well as heard.

Born and raised in Whitby, Aaron discovered music through his love of The Beatles. This led to a career in radio, writing for various publications, and ultimately a radio show about The Beatles (Beatles Universe), which ran for over four years. When not immersed in music, Aaron enjoys spending time with the loves of his life -- his wife Andrea, and daughters Emily and Linda (all of whom have an intense love of music too).
RELATED ARTICLES
album reviewalbum reviewseastgate music
9.0