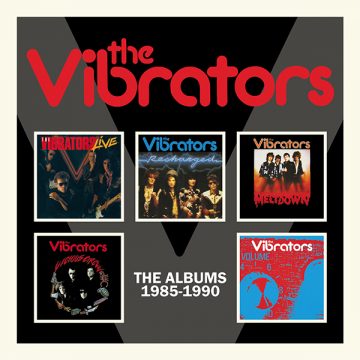 The Vibrators formed in 1976 and  were part of the first U.K. punk scene. Sensing they had found the next Sex Pistols or Clash, Epic Records signed the band and their debut album was released in 1977. By 1985 the band had signed with Revolver Records. Although some members had changed the band continued. A new lineup consisting of original Ian ‘Knox” Carnochan and John ‘Edge’ Edwards came together in 1985 and that formation went on to record four studio albums and one live album for Revolver Records. This box set collects all five albums in one convenient set and follows on the heels of  the previous box sets collecting The Vibrators  albums from 1977 – 1985.

The box set gives one the chance to hear how the band  evolved from a punk band into more of a hard rock one. Listen to “Wonderful World” (from Volume 10, 1990), with the razor fast guitars and wailing saxophone solos, it sounds more like Southside Johnny and the Asbury Jukes than punk. But that doesn’t mean it isn’t good. Quite the contrary. It is a solid rocking song with strong semi-political lyrics.

This is the beauty of the box set, starting with disc one, Vibrators Live, 1985, which is the band still carrying a punk slant. One can hear them morph into the hard rock band of Disc 5, 1990’s Volume 10. The band does not change styles so much as refine their sound. In some ways their music sounds like they are the missing link between The Skids and Big Country. As with all the original punk bands of 1976-1977, in order to survive they had to make some changes. Look at The Clash, for example, compare Combat Rock with The Clash’s debut album. The transformation is incredible. The Vibrators change is a little more subtle and not as severe.

There are bonus tracks on three of the CDs and it is a convenient way to collect most of The Vibrators’ 1980’s output. Fans of this band will want this CD, others may be interested to hear what punk sounded like in the mid to late 1980s, while others will see this as five CDs of great rock with some very decent lyrics.

The Vibrators were never as huge as The Damned, Sex Pistols, The Clash, or The Buzzcocks, and they are not always recognized for the high quality of music they created. This set goes some distance to correct that. It is time to turn our ears to The Vibrators and enjoy their hard sound of the 1980s.