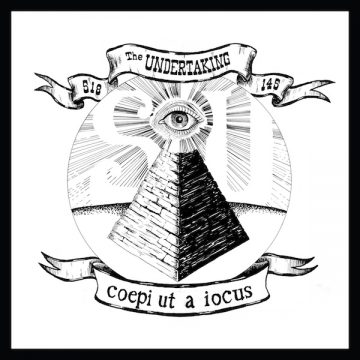 Strippers Union
The Undertaking
The Orchard

Strippers Union’s The Undertaking is the third instalment from the collaborative efforts of Rob Baker (The Tragically Hip) and Craig Northey (Odds), and supported by Pat Steward (Odds – drums), Doug Elliot (Odds – bass) and additional vocals by Emily Fennell (aka Miss Emily). The Undertaking is the end result of three years of teamwork between two veteran musicians from over 4,000 kilometres apart, with Northey being based in North Vancouver, BC and Baker in Kingston, Ontario.

The Undertaking was released on double white vinyl, limited to 1,000 certificate signed and numbered copies, which sold out within weeks. The album is also available in digital formats and, for the time being, not available on CD. The stunning album artwork, including the inner fold drawings, which whimsically depict each song (à la Robert Crumb), were created by none other than Baker himself.

There’s a lot of material to absorb with the plethora of songs totalling 18 being an anomaly nowadays. The Undertaking’s sound in comparison to Strippers Union’s previous two releases (2005’s self titled Strippers Union Local 518 and 2010’s The Deuce), overall has matured, mellowed-out and simplified (void of brass instruments), as you could expect over the course of 15 plus years. Northey’s smooth, melodic voice is prevalent through most of the album, with Baker’s contrasting deep, gravelly pitch making appearances and Fennell’s sweet vocals complimenting the landscape.

The albums first song and first single, “We Are the Underworld”, is a stand-out that will easily be a fan favourite at live shows, with somewhat of a call-and-response pattern.

“The Enforcer” is a song about friendship, a melancholic acoustic love song, sung from the perspective of a lonely hockey fighter;

“I’m here, my friend
I’m here to take care of you
I’m here doing what nobody wants to do”

Dogs are recurring theme, first with “Dogstar”, written from the perspective of a faithful dog, and then “When I Come Back as a Dog”. Both songs signifying the importance of the trust and love that canines inspire within us.

The Undertaking is an excellent contemporary, soulful, blues, rock album, with many catchy songs. Of course, there are some similarities, at times, to Northey and Baker’s other acts, but seemingly less so with this third release. This truly signifies a growth and shaping of Strippers Union’s own distinct sound, a task that can’t be easily undertaken.

John Graham is a Vancouver-area resident who typically spends most days admiring music of all genres. When not listening to music, John is usually at a live show, somewhere in the bowels of Vancouver.
RELATED ARTICLES
album reviewalbum reviewscraig northey
7.0