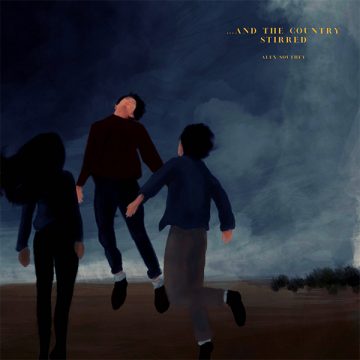 Alex Southey’s has released his latest  album, ...And The Country Stirred. Southey wrote and arranged the entire album, and provides vocals, guitars, synthesizer, and other noises. Produced and mixed by John Critchley (Elliott Brood, Dan Mangan, The Once, Amelia Curran), it also features violinist Kenny Feinstein and Tommy Drinkard on pedal steel, incredible artists in their right. Southey utilizes them to flush out these 11 extremely well-written songs.

Southey has a keen ear for marrying melody with introspective and intelligent lyrics. He is also an accomplished musician. Listen to his piano on the closing track, “And You Stirred”. It is near perfect, and perfect for the song.

Southey is smart, and does not overdo the inclusion of other musicians, as there is still a great deal of starkness and space felt throughout. But when he does, the results are breathtaking. Listen to the musical arrangements on “She Prefers Halifax”. Here, the three come together to present an orchestral song of lost love. Southey’s vocals have never sounded better, and there are wonderful layered sounds found throughout.

In the end Southey has come up with a great album. Not so much folk this time around, but more folk-based art rock.  …And The Country Stirred is full of strange sounds being layered on non-traditional songs, yet the outcome is a very pleasing album. It is an album that Southey should be proud of, and demonstrates a major step forward with his writing, arranging and performance.

Born and raised in Whitby, Aaron discovered music through his love of The Beatles. This led to a career in radio, writing for various publications, and ultimately a radio show about The Beatles (Beatles Universe), which ran for over four years. When not immersed in music, Aaron enjoys spending time with the loves of his life -- his wife Andrea, and daughters Emily and Linda (all of whom have an intense love of music too).
RELATED ARTICLES
...and the country stirredalbum reviewalbum reviews