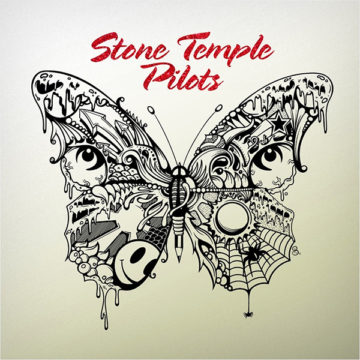 Since releasing new music in the fall of last year with new singer Jeff Gutt, following a twenty-six year long career full of massive success, innovation, breakups, reunions, and tragically, the passing of original vocalist Scott Weiland (and more recently Chester Bennington, who worked with the band on their 2013 release, High Rise), Stone Temple Pilots’ fans have been divided into three camps. The first, and the loudest in their online comment section, believe that without Weiland, there is no band, and that the core of the group, Dean and Robert DeLeo and Eric Kretz, should find new projects or retire altogether. The second, and quite polarizing, will take anything the group puts out.  The third wish that the band had continued with a different name in memory of Weiland. I find myself somewhere between the latter two. As a diehard Weiland fan – I have a tattoo to commemorate his passing and was just meters away from him at his final performance – I understand that Weiland was quintessential to the band’s success; however, the DeLeo brothers and Kretz are an incredible band, and among the best songwriters of the ’90s rock scene, who not only deserve to still be making records, but with all they’ve been through and accomplished, have earned the privilege. Stone Temple Pilots represents a return to form, but is it the comeback that will return the band to a position of pushing the boundaries and shaping our expectations for modern rock?

Stone Temple Pilots opens on a hard hitting note with the one-two-three punch that is “Middle Of Nowhere”, “Guilty”, and the debut single, “Meadow”. The opening track wastes no time before kicking off into a heavy riff. The song feels frantic and slightly jumpy, and Gutt’s vocals only add to that. His voice is grainy, and both smooth and rough all at once, giving it a quality very similar to that of Weiland. “Guilty” proves to be as heavy while being more groove driven, whereas “Meadow” is about as straight ahead of a rocker as it gets on the album. The heaviest track, and perhaps the best on the record, is “Roll Me Over”, a song full of rhythmic hits and riffs that sound like something only the DeLeo brothers could write, while Gutt’s vocals soar as he belts out a gripping and intense chorus in between moody verses.

That being said, Stone Temple Pilots shine brightest on their heavier songs on this record. As always, the ballads are beyond well written, and incorporate a quirkiness that lends itself to jazz and folk elements; however, it is clear that the elusive sense of danger, despair, and ultimately a bit of the band’s soul died with Weiland.  This is nothing against Gutt, as he does a fantastic job on the softer verses of “Six Eight” and the standout ballad, “The Art Of Letting Go”. I don’t think anyone – not even rock’s most emotive singers – could replicate the feelings and vibes that Weiland did, but Gutt comes close. There is nothing remotely bad about the slower numbers, but they lack the footing and the confidence of the hard hitting tracks.

Stone Temple Pilots’ second run at a self-titled record may not be as strong as their classic works – five essential records bookended by 1992’s Core and 2001’s Shangri-La Dee Da – however it is quite the improvement from their last two releases.  Much to the surprise of many, Stone Temple Pilots is an excellent album that signifies the rebirth of a band who very well could be given a second chance to shape the direction of modern rock once more. Gutt is not only a suitable vocalist to follow in Weiland’s footsteps, but his voice – similar enough to do the band’s catalogue justice but distinct enough for the true fans – has the potential to help lead the band forward into their new chapter. For the fans who eagerly awaited the return of Stone Temple Pilots, they will love this record, for those who were more hesitant, I urge you to give the album a chance. Stone Temple Pilots marks a dynamic revival for one of the best bands from the ’90s who were among the biggest influences on modern rock in the 2000s; it is clear, once again, that against all odds, Stone Temple Pilots is a band to watch out for.

A passion for music has always been a part of Gerrod’s life. As a young boy, he was raised on a steady diet of the music from The Chili Peppers, Aerosmith, The Stones, Prince, and others from his mum. Raised in the GTA, Gerrod continued to foster his love for music by attending a wide range of concerts and learning the drums. His unapologetic passion for music has no bounds and has spread to a wide variety of styles, whether it be the 90’s rock that sound tracked his teenage years, the jazz he studied in university, or his newfound love for hip-hop. He recently received his bachelors in music and education from York University and is passionate about writing and reviewing good (and less than good) music. Gerrod is also the drummer and songwriter for a Toronto based rock & roll band, One In The Chamber.
RELATED ARTICLES
album reviewsjeff guttscott weiland
8.0