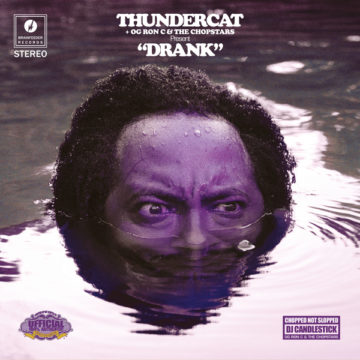 In 2017 Thundercat released his third full length album titled Drunk, an eclectic mix of hip-hop, jazz, funk, and R&B. Later that year, it was unofficially remixed by OG Ron C & the Chopstars. This chopped & screwed remix has since been officially picked up by Brainfeeder Records, to be released both digitally and on purple vinyl. Essentially it is a slowed down version of the original album, with the track listing re-organized.

The differences between the two albums are made obvious on the song “A Fan’s Mail (Tron Song Suite II)(Chopnotslop Remix)”. The listener is able to fully digest the amount of soul that comes through Thundercats singing when it’s slowed down. Even the overly-comedic lyrics seem to take on an introspective and deep tone. The detail in Thundercats bass playing really shines on this song, and the chops that The Chopstars add to the mix really play off of Thundercats performance.

A lot of songs such as “Drink Dat (feat. Wiz Khalifa) (Chopnotslop Remix)” are remnants of R&B songs from the ’90s (think 112 or Boys II Men) and help sum up the sound of the entire album. “Walk on by (feat. Kendrick Lamar)” is rendered into a spaced out soul track, breaking down Kendrick’s verse to the point where the listener can fully take in all of its meaning. Thundercats voice glides over the track and adds a very nostalgic touch. The song has a very melancholic feel, and when Thundercat sings the lyrics “Don’t wanna put up a fight anymore/ I’m down to the end of my rope” his pain is truly felt”.

As fun as Drank is, it’s not without its faults. The mixing seems to have an amateur feel to it, with the volume of tracks randomly getting higher or lower at times. It is a little longer than it needs to be, clocking in at 68 minutes, which feels like a lot longer, considering it’s mixed in slow motion. However, if you enjoyed Thundercats album Drunk, then you really do need to give this a listen. The way the album is remixed gives it a much darker and more psychedelic edge.

Cory is a film maker and music lover raised in the GTA. Ever since a young age music has been a big part of Cory’s life and he often combined his love for music and film together, creating videos of him and his friends skateboarding to their favourite songs. This trend continues in his life as everything he surrounds himself with is always involved with or inspired by music.
RELATED ARTICLES
album reviews
8.0