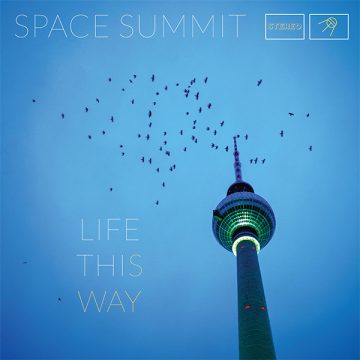 Marty Willson-Piper is one hard working artist. He is currently in a number of bands (Anekdoten, Noctorum and MOAT), his own solo music, and now he introduces Space Summit, his latest project. It is a project with a very interesting history. Space Summit started as discussions around music and guitar technique in 2013 between Willson-Piper and Jed Bonniwell. Their discussions eventually grew into songwriting and musical collaboration. And all the collaborating between the two occurred through Cyberspace. Willson-Piper (who played bass and guitar) and Bonniwell wrote the music, while Bonniwell provided lyrics and the vocals. Willson-Piper also produced the album with his long-time collaborator Dare Mason (who also provides keyboards). Others helping out with the album include Eddie John (drums), Phoebe Tsen (vocals) and Olivia Wilson-Piper (strings).

The album kicks off “I’m Electric”, featuring some heavy guitar work from Willson-Piper, giving way to the dreamlike vocals of Bonniwell. The song is a cross between hard rock and psychedelia and it works on every level. Great lyrics are married to a strong melody, backed by a very tight band. This song is followed by the more acoustic title track, a very mellow and spacious song that builds as it plays. It is very different from the opening track, which is one of the reasons this album is so appealing. One does not know which direction the two are going to take the listener.

There are more poppy songs such as  “Queen Elizabeth’s Keys” and hard rock sounding ones as “Ancient Towers”, and at times psychedelic music comes into play as it does on “Deep Paisley Underground”, but it all fits together.

Lyrically, Bonniwell taps into mind expanding, tripping lyrics that allow the listener to read into and attribute their own meaning. This is in no way a criticism, the lyrics fit the melody perfectly and this all adds up to a very cohesive and consistent album.

Marty Willson-Piper has done it again. He has teamed up with the very talented Jed Bonniwell and the end result is a truly different and unique album. It is one that may require a couple of spins before it starts to sink into your psyche but it is very worth it. Space Summit’s debut album Life This Way has a retro feel to it, while at the same time being completely contemporary. This is a difficult achievement and Willson-Piper and Bonniwell succeed.

Born and raised in Whitby, Aaron discovered music through his love of The Beatles. This led to a career in radio, writing for various publications, and ultimately a radio show about The Beatles (Beatles Universe), which ran for over four years. When not immersed in music, Aaron enjoys spending time with the loves of his life -- his wife Andrea, and daughters Emily and Linda (all of whom have an intense love of music too).
RELATED ARTICLES
album reviewalbum reviewsmarty willson-piper
10