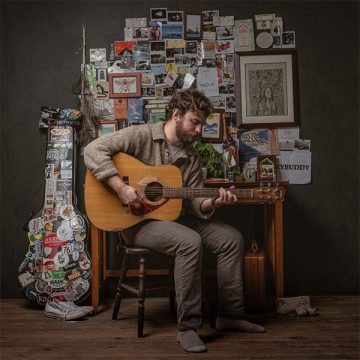 Matthew Fowler
The Grief We Gave Our Mother
Signature Sounds

For each and every artist that goes the singer songwriter route, there is always one, almost gigantic hurdle they have to jump over. That hurdle is at the same time a very complex one. How do you handle and present your very personal and intimate feelings and thoughts?

Florida-born Matthew Fowler tries to jump that hurdle on his latest album The Grief We Gave Our Mother. To use sports terminology, he makes the crossing barely scraping it. To be able to do so, Fowler was equipped with some good songwriting skills, both musically and lyrically, at the same time wrapping his songs into some delicate arrangements that never go at the extreme side of the possible spectrum. No monotonous acoustic guitar strumming on end, nor overly melodramatic orchestrations on the other.

At the same time he has a uniquely pleasing voice, somewhat akin to that of Ray LaMontagne, that give his songs that touch that make certain they work. Maybe Fowler and his kin really gave grief to their mother at some point, but this album certainly won’t.

Formerly a lot of things, including a journalist and a translator, currently a freelance writer living in The Netherlands.
RELATED ARTICLES
album reviewalbum reviewssignature sounds
8.0