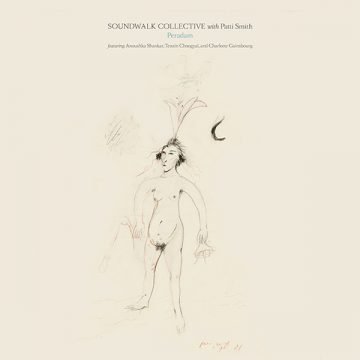 Peradam is the fourth release from Soundwalk Collective with Patti Smith. In 2019, this collaboration explored the works of poets Antonin Artaud on The Peyote Dance,  and Arthur Rimbaud on Mummer Love. Peradam dives into the writings of René Daumal in Mount Analogue: A Novel Of Symbolically Authentic Non-Euclidean Adventures In Mountain Climbing. Not a subject for an average album, but then again, Soundwalk Collective and Patti Smith are anything but average. They take the listener into new, unexplored audio worlds. In the novel, Daumal introduced the concept of the “peradam”, which is an object that is revealed only when someone knows they are seeking it.

Animal Collective thrives on its use of field recordings, and have produced some incredible work by incorporating sounds they have collected in their journeys. For Peradam, Stephan Crasneanscki and Simone Merli travelled to Nanda Devi,  Rishikesh, Varanasi, and Upper Mustang in and around the Himalayas, in hopes of capturing the sounds Daumal was writing about in his book. This allowed Smith to record her vocals, which are part spoken word, part singing, and part chanting, over the sounds. Everything comes together to form a rhythmic and melodic backing, and Patti Smith sounds as good as ever. She embraces the idea of the novel and the concept of the Brooklyn-based duo.

Others come in to help with the project.  Charlotte Gainsbourg contributes to “The Four Cardinal Times”, Dhan Singh Rana, a Sherpa in his 70s, sings acapella in his native language on the opening track “Nanda Devi”, Anoushka Shankar performs sitar on “Knowledge Of The Self”, and Tenzin Choegyal added vocals, Tibetan drums, singing bowls, dranyen, and damru to the title track as well as “Spiritual Death” and “The Rat”. These artists have a connection to Daumal or his journeys into the world or self. It is interesting to note that Daumal has worked with Shankar’s family.

Peradam is not an album for everybody, but it could be. Enter into this world with an open mind. One needs to sit, listen, and focus only on what one is hearing. It is an escape into a spiritual world, full of well-orchestrated sounds and words. It is, quite simply, a work of art and is one of the most important albums released this year.

Born and raised in Whitby, Aaron discovered music through his love of The Beatles. This led to a career in radio, writing for various publications, and ultimately a radio show about The Beatles (Beatles Universe), which ran for over four years. When not immersed in music, Aaron enjoys spending time with the loves of his life -- his wife Andrea, and daughters Emily and Linda (all of whom have an intense love of music too).
RELATED ARTICLES
album reviewalbum reviewsbella union
9.0