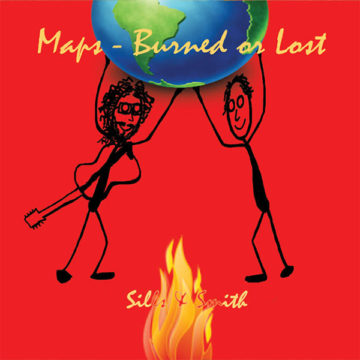 Maps – Burned or Lost is the sixth studio album from Sills & Smith. And although they have produced some mighty fine music in the past, they knock it out of the park with this one. Not so much a concept album, but a thematic album, musically and lyrically. Here is an album to sit down, grab a cup of tea, get comfortable, turn off all distractions and just listen to. It is an album that does not demand that you listen, but Maps – Burned or Lost is an album to which you should give your undivided attention.

While earlier albums by Sills & Smith leaned towards a more prog rock sound, this album is almost stripped-bare at times. They have a lot of people helping them out, but producer Phillip Victor Bova (who also provides outstanding bass, keyboards, strings and Hammond organ) has wisely let the songs breathe on their own. He knows when to build up the sound, and he knows when to step back and let Sills & Smith do their own thing.

The playing throughout the album is outstanding. Sills’s acoustic guitar provides the ideal centre point for many of the songs. Add on Smith’s inspired vocals and you have one hell of a strong sound. The songs are melodic, well-written, and what is interesting: every note, every sound, everything, has been planned. Sills & Smith have created a beautifully-arranged album and left nothing to chance. Maps – Burned or Lost is full of interesting sounds and instruments that only add to the songs.

But the important aspect of this album is the songs themselves. You can have the best arrangements in the world, and the best musicians (and for the record there are some outstanding musicians on this album), but if they don’t start with a strong song, it is all for naught. But here, the songs on Maps – Burned or Lost are little stories, emotions and thoughts that all add up to the greater whole. Again, not a concept album, but there are themes. Loss, emotional pain, and questioning the universe are all here. In other words, the album is the human condition.

The sequencing of songs is also outstanding. The album begins with “On the Edge” with lyrics about being on the edge (“Twists and turns, Humpty’s Fall, We can’t align the pieces”) but by the last song, “At The End of The Day,” there is not so much hope but acceptance (“And at the end of the day, Forget all your troubles, Put your things away”).  Throughout the album, the songs build to this conclusion. One song worthy of note, “Wash Away,” is a highlight of the album and one can see how it continues to build on the themes noted before.

Sills & Smith are two very talented individuals who continue to release top notch albums. Maps – Burned or Lost is a brilliant album, and the album they have been working towards for the past few years. Strong melodies, a tinge of prop rock, but in the end, the music and lyrics are distinctly Sills & Smith.

Born and raised in Whitby, Aaron discovered music through his love of The Beatles. This led to a career in radio, writing for various publications, and ultimately a radio show about The Beatles (Beatles Universe), which ran for over four years. When not immersed in music, Aaron enjoys spending time with the loves of his life -- his wife Andrea, and daughters Emily and Linda (all of whom have an intense love of music too).
RELATED ARTICLES
album reviewsfrank smithjeremy sills
8.0