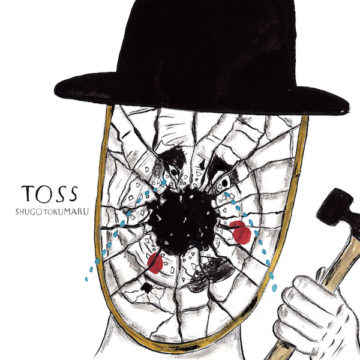 Slice everything into pieces, toss them in the air, let them fall to the ground, then pick them up and arrange them in any random order and see what you can come up with.  I guess that is maybe what Shugo Tokumaru thought what he came up with the idea for his new album Toss. This is the fifth time Tokumaru’s music is coming our way, and so far, he has shown an extraordinary knowledge and grasp of everything melodious from The Beach Boys to Bossa. Basically, he was coming up with great melodious pop/rock that seemed effortless and was easy and enjoyable to the ear. It was also quite fascinating that Tokumaru would produce essentially all of the music by himself on a multitude of known and unknown instruments.

On Toss, things got a bit more complicated. Not only with the process, Tokumaru used to make it, but also what he has come up with sonically. Shugo actually commissioned or simply used pieces of music played and composed by others and spliced them up into pieces and then, it seems, did exactly what I described at the beginning. You really need to be a musical genius and a studio wizard for that to work every time, and even then not everything is going to work completely. Toss is no exception. But, Tokumaru manages to pull it off quite enough times here for even those listeners that are not so familiar with him (or his countryman Cornelius who has dabbled with this kind of experimenting himself) to qualify this as a very listenable success. The opener “Lift” is a brief enough collage that piques the interest and the single “Lita-Ruta” is like an expose of all what Tokumaru is capable of.

On the other hand, a song like “Taxi” comes off like a show-off joke, that doesn’t do much except, well, show off. Shugo obviously got a bit carried away here. He obviously likes Raymond Scott and cartoon music (but then so do I), as “Cheese Eye” shows, but that is an experiment that actually works quite well. Luckily, not many like that one are present on this album. Since it is obvious that Tokumaru is best when he switches to his ‘simplicity’ mode like on mostly piano and voice piece “Route”. Is this the best album Shugo Tokumaru has come up with? Probably not. Is it a good and enjoyable album even with its few and far between excesses? Definitely. But one thing is for sure — we can expect more good music from Tokumaru.

Formerly a lot of things, including a journalist and a translator, currently a freelance writer living in The Netherlands.
RELATED ARTICLES
album reviewspolyvinyl records
7.0