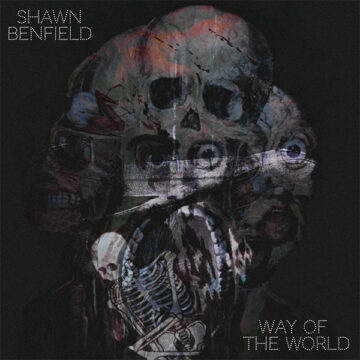 Shawn Benfield is from West Virginia, which has found its way into his music, for the better. Way Of The World is his debut album, and it is one hell of a debut. This is country rock at its finest, with a bit of emphasis on the country. And it works, and it works extremely well. Benfield has obviously listened to a lot of diverse music, and he has poured all of his influences into a pot, and has come up with his own distinct style and sound. He has written 10 very personal and emotional songs, couched in pure driving music. He leans toward the older country artists, and stays away from the current pop-country sound. It is an impressive debut. He has released an E.P., which gave a strong indication of what he was capable of doing, but Way Of The World exceeds all expectations.

The album kicks off with a burst of energy, and the title track. Blistering guitars and a slow beat introduce us to the album in a very raw way. Benfield shouts/growls out the lyrics while he creates an organized noise around him. The guitar is particularly spectacular. Searching for answers is the name of the game in this song, and the answers are just not easily found. “Somebody please tell me what the Hell is going on”, he pleads at the end of the song, letting the guitars take over to play the song out. It is an incredible moment.

Benfield brings it down for the second song, an incredibly honest work titled “Never Let It Go” about his sobriety. It is touching, thought-provoking and beautiful. He follows this up with moving love songs (“Right Here With You (Right Here With Me)” and the incredible “Surrender To The Flame”), his place in the world (“Indifference”), world issues (“The Stand”) and other subjects of importance to Benfield.

Benfield crafts each song perfectly. He uses language like a musical instrument and his music is his opportunity to express himself. This comes out in the music as well. He writes fantastic and strong melodies. Not exactly earworms, but each song makes you want to keep listening. He engages the listener with ease and keeps them with him from beginning to end.

The album ends with the only cover, that of the classic folk song “The Wayfaring Stranger”. It is the perfect song to end this album, and quite frankly when Benfield sings it, it sounds like it was written for him. Johnny Cash, Emmylou Harris, Jack White and Natalie Merchant have all recorded this song and created their own take on the song. Benfield can now be added to that list. He comes at the song with an acoustic guitar and his wonderful voice and he has created yet another classic.

Way Of The World is a very strong and hopeful album. Benfield does sing about some very heavy subjects but he does it with one foot firmly with his faith and hope. As a result the album is jammed full of songs that cannot help but impact the listener. By the end of the album each emotion was touched upon through his music, lyrics and powerful voice. Benfield has knocked it out of the park with Way Of The World.

Born and raised in Whitby, Aaron discovered music through his love of The Beatles. This led to a career in radio, writing for various publications, and ultimately a radio show about The Beatles (Beatles Universe), which ran for over four years. When not immersed in music, Aaron enjoys spending time with the loves of his life -- his wife Andrea, and daughters Emily and Linda (all of whom have an intense love of music too).
RELATED ARTICLES
album reviewalbum reviewsshawn benfield
8.0