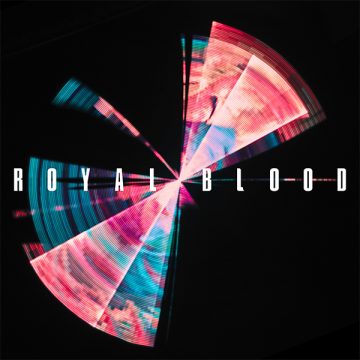 If neon had a sound, it would be the sleek grit of Royal Blood’s third album, Typhoons. Following the release of 2017’s How Did We Get So Dark?, the duo has seemingly traded in their rough and raw rock tone for a modern alternative aesthetic in tone with Queens Of The Stone Age and Arctic Monkeys. The result is a bass and synth-heavy series of bangers that you can’t help but bop your head to.

Opening with the initial single, “Trouble’s Coming” kicks off with a quick sonic build reminiscent of Chic’s “Le Freak” before diving into a bass and drum strut that only Royal Blood could deliver with such conviction. Mike Kerr’s vocals are glossy and smooth, sailing over the fuzzy and sometimes abrasive tones of his bass, and Ben Thatcher’s tight grooves and occasional massive fills. “Trouble’s Coming” is among the more rock flavoured tracks on the album, but it is still accented by synths and a top forty inspired bridge, the former of which feels unnecessary in a track like this while the latter demonstrates a matured a tasteful sense of songwriting that has developed over the years. In many ways, “Trouble’s Coming” represents the tightrope that Royal Blood walk on Typhoons, making it the perfect lead single and opening track to be set the tone and raise the bar for the album.

Throughout the remaining 10 tracks, Royal Blood dance between a gritty rock band who you’d find in a dim lit, sweaty, and packed beyond capacity dive of a club, and the alternative-rock/pop band you’d hear gracing the airwaves as the hottest band doing what they do. Regardless of which side of the band you prefer – from the bombastic sonic assault of “Oblivion” to the ever-so catchy anthem of a title track – Royal Blood find a balance between the two between tracks and even within the same song – the contrast between the verse and chorus on “Who Needs Friends” may be the best example of this. Such a balance is what makes Typhoons such an exciting and unique record; however, it also stands as it’ greatest downfall. Royal Blood are far from the roots of their 2014 debut and, in their quest to sound increasingly modern and pop, have been experimenting heavily with synths that simply feel – for the most part – unnecessary. This, however, does not stop Typhoons from shining as a great record, one that is bound to be a favourite for this year. On top of the previously mentioned songs, “Limbo” is an additional highlight and “Boilermaker” stands as the definite peak on the album with its Josh Homme-inspired riff, and its beyond sleazy and slinky swagger.

Make no mistake, while Typhoons may mark a continued departure from the hard rock Royal Blood made their mark with, it is very much a Royal Blood record. In every way, even with its alternative pop flair, Typhoons remains sonically distinct. An exciting addition to their catalogue, fans should be excited to see what else the band has up their sleeve. Ultimately, despite its flaws, Typhoons is a catchy and exciting thrill ride from start to finish that demonstrates why Royal Blood are among the best bands from the last decade.

A passion for music has always been a part of Gerrod’s life. As a young boy, he was raised on a steady diet of the music from The Chili Peppers, Aerosmith, The Stones, Prince, and others from his mum. Raised in the GTA, Gerrod continued to foster his love for music by attending a wide range of concerts and learning the drums. His unapologetic passion for music has no bounds and has spread to a wide variety of styles, whether it be the 90’s rock that sound tracked his teenage years, the jazz he studied in university, or his newfound love for hip-hop. He recently received his bachelors in music and education from York University and is passionate about writing and reviewing good (and less than good) music. Gerrod is also the drummer and songwriter for a Toronto based rock & roll band, One In The Chamber.
RELATED ARTICLES
album reviewalbum reviewsroyal blood
8.0