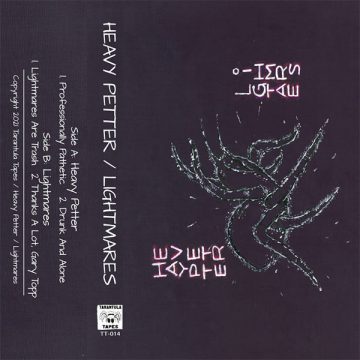 Teaming up for a split release is Barrie’s Heavy Petter and Sudbury’s Lightmares. The four-track cassette release – via Tarantula Tapes – is spilt between the two bands like a pair of double singles and serves as a good sampler for both bands. Split is the first release from Heavy Petter since their 2019 album, Such A Drag, and is the long-awaited return for Lightmares since 2020’s Sing A Prayer.

The first half of the split release consists of Heavy Petters’ “Professionally Pathetic” and “Drunk And Alone”. The former opens the record with an old school punk barrage of power chords, thick distortion, and unrestrained vocals from Casey Cuff. “Professionally Pathetic” wouldn’t sound out of place in the underground punk scene of Los Angeles in the early ‘80s – think The Germs or X. “Drunk And Alone”, on the other hand, sounds far more modern with Core Bee taking lead vocals and adding more of a grungy pop punk vibe to the band.

Lightmares take over the second half of the album and will leave you nostalgic for crowding into a packed punk club on a Friday night. “Lightmares Are Trash” kicks things off with a self-depreciating anti-anthem that feels like a grimy and abrasive take on ‘80s new wave alt-rock only without the synths. The track comes out of nowhere and hits like a hammer to the side of the head. The album comes to a close with the unexpectedly cheery “Thanks A Lot, Gary Topp”, a track which is accented by its gang vocals, rhythmic power chords, and melodic lead vocals.

A passion for music has always been a part of Gerrod’s life. As a young boy, he was raised on a steady diet of the music from The Chili Peppers, Aerosmith, The Stones, Prince, and others from his mum. Raised in the GTA, Gerrod continued to foster his love for music by attending a wide range of concerts and learning the drums. His unapologetic passion for music has no bounds and has spread to a wide variety of styles, whether it be the 90’s rock that sound tracked his teenage years, the jazz he studied in university, or his newfound love for hip-hop. He recently received his bachelors in music and education from York University and is passionate about writing and reviewing good (and less than good) music. Gerrod is also the drummer and songwriter for a Toronto based rock & roll band, One In The Chamber.
RELATED ARTICLES
album reviewalbum reviewsheavy petter
9.0