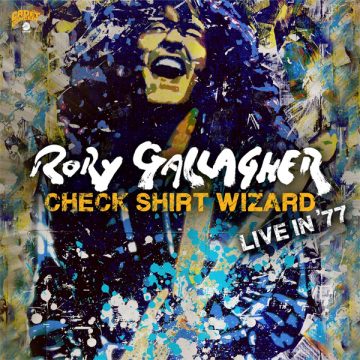 With the critical praise that surrounded last year’s Blues, the Rory Gallagher estate has wasted no time in releasing this double-disc’s worth of live material.

The masters for these four shows were captured in January 1977 on the Rolling StoneS/Jethro Tull mobile studios and recently remastered at Abbey Road. If you know anything about mid-70s Rolling Stones records, they are recently not audiophile releases. The same can be said for the recording of Check Shirt Wizard. However, even poor audio quality cannot diminish the intensity of Gallagher’s musicianship.

Check Shirt Wizard primarily features material from his then recently-released album, Calling Card. One of his better studio albums, we hear him run through some of his best-honed tunes. These versions of “Jack-Knife Beat”, “Moonchild”, and “Edged in Blue” have an intensity that is unparalleled and just isn’t there on the original versions.

While Check Shirt Wizard isn’t quite on par with Live in Europe or Irish Tour, it certainly has all the characteristics that make up a great Rory Gallagher live album. His vocals here are not quite what they were on his early work, but his energy more than makes up for it. And let’s face it, no one is really listening to Gallagher because they want to hear angelic singing. You listen to the Irish blues-rocker for his gritty virtuosity and there is an abundance of that here.

As a child growing up in the suburbs, Ryan found music as a way to soothe his boredom. After first hearing AC/DC at the age of 10, he was hooked on music. Tracing its roots to the ‘50s, he became obsessed with Elvis, Buddy Holly and Chuck Berry. Somehow that led to grunge, then psych-rock, then jazz, etc. The list goes on and on and his collection of vinyl records continues to grow.
RELATED ARTICLES
album reviewalbum reviewsrory gallagher
8.0