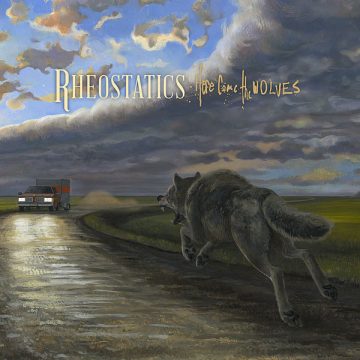 The new Rheostatics album, Here Come the Wolves, their first new album since 2004’s 2067, is a joyful and pleasant surprise. Their new offering from Six Shooter Records is a 53-minute affair containing 12 masterfully wonderful songs.

The album Here Come the Wolves maintains the distinctive Rheostatics voice-forward sound, with multiple members at the vocal helm at times, and a distinctive whimsical guitar sound, which nicely remains fresh and new, after all these years. Stand-out first track, the dreamy “Vancouver”, reminds us once again that Tielli’s vocals are a national treasure.

The title track opens with Clark’s booming drums, reminiscent of The Stone Roses’ “Shoot You Down”. The vocal transition from Bidini at the lead with Tielli bringing up the rear completes this absolute complex gem.

The Vesely-sung “Rearview” builds acoustically with fervour and takes the listener to a place of melancholic reminiscing while looking toward a positive future, without apology.

“It’s the Super Controller!”, sung passionately by Clark, evokes shades of Queen and Andy Shauf, amongst the plethora of big band piano, brass, and woodwind instruments.

In closing, “Mountains and the Sea” is a breezy, fitting, flowing outro. Bidini brims with optimism with the lyrics “Come away with me, we’ll choose between the mountains and the sea”.

It’s been far too long since the last album released by Rheostatics. This triumphant return is sure to satisfy existing fans, most of which will welcome this like an old friend not seen for years. As well, Here Come the Wolves is sure to bring Rheostatics new admirers, who’ve not experienced the band’s genius, until now.

As one commenter on the YouTube video posting for title track “Here Come the Wolves” so elegantly comments “It’s like mayonnaise for my ears”. One couldn’t describe the song and the entire album any better.

John Graham is a Vancouver-area resident who typically spends most days admiring music of all genres. When not listening to music, John is usually at a live show, somewhere in the bowels of Vancouver.
RELATED ARTICLES
album reviewalbum reviewsbarenaked ladies
7.0