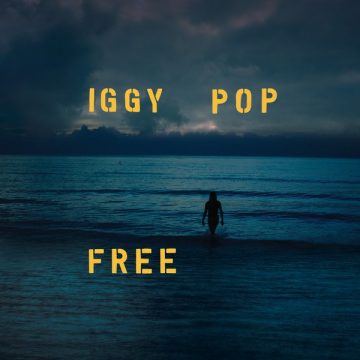 “He’s the last of the one-and-only’s” Josh Homme once said, regarding his collaboration with Iggy Pop on 2016’s Post Pop Depression. The brilliant record was supposedly Pop’s recorded swan song, however I remained both hopeful and skeptical that the godfather of punk rock would return to the studio. While he’s spent the last few years touring with both his Post Pop Depression and his solo bands, Pop has returned with his latest album, Free.

Having worked with jazz musician Leron Thomas, from the opening notes of “Free” it is immediately apparent that this will be a musical journey unlike any expectations you’ll have for Pop. Furthermore, the album is driven by the poetry of others – including Lou Reed’s “We The People” and Dylan Thomas’ “Do Not Go Gentle Into That Good Night” – which Pop has interpreted in a lyrical and musical context. The album opens with the title track, a brief song accented by a series of warm horns. This is followed by “Loves Missing”, perhaps the most mainstream of tracks on the record yet remains cloaked in an aura of jazzy mystery set over a climatic swell of growing guitars, busy horns, and rhythmic drums as Pop’s voice – weathered, aged, and full of reckless abandon – bellows among the rich soundscape.

While firmly planted in an esoteric sense of free jazz, Free takes inspiration from a number of different styles of music. “Sonali”, for example, feels reminiscent of Pop’s debut solo record, The Idiot – in tone with “Sister Midnight”, while “James Bond” feels far more modern, that is until Thomas’ intense trumpet solo. The album seems to grow more progressively experimental with each song as “Dirty Sanchez” brings along a more traditional jazz and Latin sound while “Glow In The Dark” and “Page” trade conventional structures for stark atmospheric and ambient soundscapes. “We The People” brings a sense of darkness, as Pop solemnly reads the work of Reed over muted and distant, yet smooth jazz, while “Do Not Go Gentle Into That Good Night” and “The Dawn” both evoke a similar darkness and grit, making the three some of the most impactful tracks on the record, bringing Free to a dramatic and strong close.

Having built a career on shocking and spontaneous innovations, Pop has once again delivered an album that I did not think possible. The words cinematic, jazzy, and poetic are seldom used to describe both The Stooges and his solo work, and yet Free is all of these and more. Think Bowie’s Blackstar or Arctic Monkeys’ Tranquility Base Hotel & Casino, this is Pop intentionally discarding all values, traditions, and practices of popular music and replacing them with the limitless possibilities of pure experimentation, improvisation, and musical freedom. While not a record one would put on every day, Free is the latest expression of Pop’s sheer sense of joy and love for music, and it certainly delivers.

A passion for music has always been a part of Gerrod’s life. As a young boy, he was raised on a steady diet of the music from The Chili Peppers, Aerosmith, The Stones, Prince, and others from his mum. Raised in the GTA, Gerrod continued to foster his love for music by attending a wide range of concerts and learning the drums. His unapologetic passion for music has no bounds and has spread to a wide variety of styles, whether it be the 90’s rock that sound tracked his teenage years, the jazz he studied in university, or his newfound love for hip-hop. He recently received his bachelors in music and education from York University and is passionate about writing and reviewing good (and less than good) music. Gerrod is also the drummer and songwriter for a Toronto based rock & roll band, One In The Chamber.
RELATED ARTICLES
album reviewalbum reviewsfree
9.0